Quantum isn't the next big thing in advanced computing so much as a futuristic approach that could potentially be the biggest thing of all. Considering the theoretical possibility of quantum fabrics that enable seemingly magical, astronomically parallel, unbreakably encrypted, and faster-than-light subatomic computations, this could be the omega architecture in the evolution of AI (artificial intelligence). No one doubts that the IT industry is making impressive progress in developing and commercializing quantum technologies. But this mania is also shaping up to be the hype that ends all hype. It will take time for quantum technology to prove itself a worthy successor to computing's traditional von Neumann architecture. 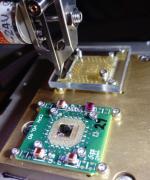 At its Ignite conference, Microsoft today put its stake in the ground and discussed its progress in building a quantum computer and giving developers tools to experiment with this new computing paradigm on their existing machines. There's a lot to untangle here, and few people will claim that they understand the details of quantum computing. What Microsoft has done, though, is focus on a different aspect of how quantum computing can work -- and that may just allow it to get a jump on IBM, Google and other competitors that are also looking at this space. The main difference between what Microsoft is doing is that its system is based on advances in topology that the company previously discussed. Most of the theoretical work behind this comes from Fields Medal-recipient Michael Freedman, who joined Microsoft Research in 1997, and his team.

Quantum computing and machine learning are two of the most exciting technologies that can transform businesses. We can only imagine how powerful it can be if we can combine the power of both of these technologies. When we can integrate quantum algorithms in programs based on machine learning, that is called quantum machine learning. This fascinating area has been a major area of tech firms, and they have brought out tools and platforms to deploy such algorithms effectively. Some of these include TensorFlow Quantum from Google, Quantum Machine Learning (QML) library from Microsoft, QC Ware Forge built on Amazon Braket, etc. Students skilled in working with quantum machine learning algorithms can be in great demand due to the opportunities the field holds.