More than 800 al-Qaeda fighters have been killed in an assault by the Yemeni government and Arab allies on the group's main stronghold of Mukalla, according to the Saudi-led coalition. The coalition said in a statement, carried by the official Saudi news agency SPA late on Sunday, that many al-Qaeda members had fled the city, the provincial capital of Hadramout, which they had held for a year. The statement said the forces of President Abd-Rabbu Mansour Hadi were backed by Saudi and Emirati special forces in the operation on Mukalla, which is home to an estimated 200,000 people. The death toll could not be independently verified. The move appeared to be part of a wider offensive aimed at taking back parts of the country from groups such as al-Qaeda, who have exploited a 13-month war between Saudi-backed government loyalists and Houthi rebels supported by Iran.

At least 25 Yemeni civilians have been killed by Saudi-led coalition air strike on a market in the northern Saada province, according to a local health official. The director of the Houthi-run health department office in Saada said the aircraft conducted two raids on al-Mashnaq market in Shada district close to the Saudi border on Saturday. "Rescue teams were unable to reach the area for some time for fear of being hit by artillery shelling of the area," the official, Dr Abdelilah al-Azzi, told Reuters news agency by telephone on Sunday. Several Yemeni online news outlets carried similar reports of the bombing in Saada, which sits directly along the Saudi border. Officials from the Saudi-led coalition could not immediately be reached for a comment on the report.

A Saudi-UAE-led coalition fighting Yemen's Houthi rebels has sent more than 10,000 additional troops towards the rebel-held port city of Hodeidah, according to Yemeni government officials. The deployment is part of a planned new offensive aimed at securing "areas liberated" from the Houthis, a military official told AFP news agency on Tuesday. According to the unnamed official, the mission is expected to commence "within days" and forces from Sudan, part of the coalition, had moved in to "secure" areas around the strategic city. For the past 10 days, Houthi rebels have stationed fighters on the rooftops of buildings in Hodeidah city, AFP reported government military officials as saying. The Yemen conflict began in 2014 when the Houthis toppled the government of President Abd-Rabbu Mansour Hadi and took control of the capital, Sanaa. 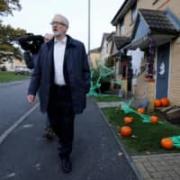 CAIRO – Yemen's civil war has killed more than 100,000 people since 2015, a database project that tracks violence said Thursday. The Armed Conflict Location & Event Data Project, or ACLED, said in a new report its death toll includes more than 12,000 civilians killed in attacks targeting civilians directly. The conflict in the Arab world's poorest nation began with the 2014 takeover of northern and central Yemen by Iran-aligned rebels, driving out the internationally recognized government from the capital, Sanaa. Months later, in March 2015, a Saudi-led coalition launched its air campaign to prevent the rebels, known as Houthis, from overrunning the country's south. Saudi-led airstrikes have hit schools, hospitals and wedding parties and killed thousands of Yemeni civilians.

The Saudi-led military coalition fighting the Houthi group in Yemen has destroyed two explosive-laden boats in the Red Sea on Thursday, the coalition's spokesperson said. The two remotely controlled boats belonged to Houthi forces and were threatening navigation, according to the spokesperson's statement carried on Saudi state news agency SPA. The boats were destroyed 6km (3.7 miles) south of the Yemeni port of Salif. Arabic media cited a spokesman for the Saudi-led coalition, Turki al-Malki, as saying the Houthis' boats had posed an "imminent threat to sea lines of communication, international trade and regional and international security". "[The boats] were prepared to imminently execute hostile and terrorist actions in the Bab Al Mandab Strait and Southern Red Sea," said al-Maliki.