Lawsuit on Immigration Law Dropped, to Be Filed Federally

Attorneys for Niceforo Macedo-Hernandez of Crystal Lake say the McHenry County sheriff's office violated the law by holding him on an Immigration and Customs and Enforcement detainer. He was arrested on a domestic battery charge, but transferred to ICE custody after bond was paid.

"What I simply think we need to do is get a legal immigration system that works for American workers," Cotton told Martha MacCallum on "The First 100 Days." "Over the last several decades, we've seen wages stagnate for blue collar workers. At the same time, we've had record high numbers of unskilled and low-skilled immigration. I think those two things are directly connected." Cotton, who has been among President Donald Trump's most loyal supporters on Capitol Hill, said that Trump's victory in last year's presidential election was a signal from the American people to lawmakers to fix the country's immigration system. "But the single issue on which he campaigned above all others and set himself apart was immigration and refocusing our immigration system on working Americans," he said.

During a news conference Wednesday, immigration and law enforcement officials said the new protocol will allow jail operators to comply with federal requests to detain immigrants suspected of living in the country illegally. 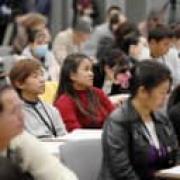 A Twitter post by the Tokyo immigration bureau that appears to chide people who vandalized public property with messages that criticize the country's treatment of asylum-seekers has gone viral, with many criticizing the tweet's focus on the graffiti rather than the broader issue over refugees. The Tokyo Regional Immigration Bureau posted the tweet on Tuesday, along with photos of a sidewalk, a wall and a nearby pedestrian bridge in Tokyo's Minato Ward that were vandalized with graffiti reading "free refugees" and "refugees welcome" in English using all capital letters. The bureau, which said the graffiti had been found Monday morning, commented: "Freedom of expression is important but this is public property. The post was hit with a barrage of criticism over its focus on graffiti rather than refugees. "If you are going to criticize graffiti, then don't repeat human rights violation," one comment read. As of Wednesday, the bureau's post had been retweeted more than 6,000 times and received about 1,300 comments. Japanese immigration facilities have long been criticized inside and outside the country for their lengthy detention periods for foreign nationals who lack residency status and face deportation orders. They are not immediately repatriated if their home countries refuse to accept them or if they seek refugee status. More than a dozen people have died from illness or suicide at immigration facilities since 2007. Earlier this year at the Tokyo bureau, staff were found to have not provided treatment to a Turkish man for about one month, even though he had complained of pain after undergoing an appendectomy. An official of the bureau said its tweet was not intended to "fight back" against what was written on the sidewalk. "We have an obligation to accept criticism over immigration control policies, but we tweeted in the hope of warning (about graffiti) because it will cause trouble to others who have nothing to do with the issue." Koichi Kodama, a lawyer familiar with immigration detention issues, said: "Graffiti could be a crime.