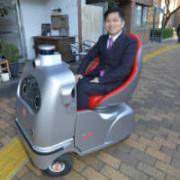 The driver, who got the bus humming with the push of a button, stayed behind the wheel but was hands-off most of the time, keeping intervention to a minimum. The bus, sporting an array of sensors and cameras, was limited to a maximum speed of around 30 kph. The bus completed the circuit from Gunma University to Shibukawa Station in about an hour, twice a day for nine days, as part of a pilot program set up by the school, a local bus line, the Gunma Prefectural Government and NEC. The aim: to achieve the government's goal of getting driverless vehicles up and running on Japan's roads by the end of the year. The move underlines the fact that self-driving vehicles are no longer a vision for the distant future, but just around the corner.

The driverless taxi era has finally arrived, in parts of Arizona, at least. Two weeks after Alphabet-owned Waymo started its driverless taxi service to the public in Phoenix, other autonomous vehicle developers are following suit with test vehicles on public roads as well. Until spring this year, Waymo's self-driving vehicles were in their testing phase and were used in up to 10% of the firm's rides. The pandemic forced the company to shutter its doors and temporarily suspend on-road testing, but it is now back online and is expanding its operations. However, as is still required by law, the Waymo One taxi currently requires a human driver to be present to manage the car's autonomous operation and take control when necessary.

Subaru Corp. aims to start selling vehicles equipped with the equivalent of "level-2" autonomous technology, which can steer, accelerate and slow down on ordinary roads, in the second half of the 2020s, company officials said Tuesday. But developing such vehicles to run on ordinary roads has been a challenge, due to the need to respond to unexpected scenarios such as pedestrians' movements in order to avoid accidents. Subaru plans to develop a next-generation system using its EyeSight Driver Assist Technology and artificial intelligence to recognize a traffic lane even when the white line on the roads cannot be seen. Level-2 technologies allow drivers to take their hands off the steering wheel under certain conditions, but drivers are still required to monitor the vehicle's driving at all times. Earlier this year, Toyota launched new models of its luxury sedan Lexus LS and hydrogen-powered Mirai that are equipped with level-2 assistant technologies.

Toyota has announced the creation of a joint venture (JV) which will focus on the research and development of self-driving technologies.

The Best Cars With Self-Driving Features For 2020

How on earth did they get their driver's license? This is something we've all said about some maniac on the road. Despite strict laws, there are still plenty of people not concentrating on the road. Thankfully, the future of safer driving is upon us. The eventuality is that driving could become a thing of the past.