Ditching Zoom? Here Are 10 Video Chat Alternatives You Can Use Instead

The COVID-19 pandemic has resulted in a slew of requests and orders to stay home and work remotely as much as possible, in an effort to slow the spread of the novel coronavirus. All that isolation means many are using video conferencing software like Zoom to get work done and talk to friends or family. But Zoom has found itself in hot water after its privacy practices have been called into question. While the company promises it's working to address those issues, you don't have to sit there and take it -- you can switch apps. There are plenty of video chat services to switch to, each with their own advantages and disadvantages making them better suited to different uses, whether it's to talk to grandma, play games with friends, or connect with colleagues. 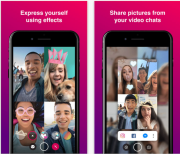 The Future Is Video: KikBuys Rounds To Jump Into Video Chat Trend

In mid-2016, a video chat app called Rounds did something that would completely change the course of its lifespan. It released a second app, called Booyah, that let you send links into a popular chat app like WhatsApp or Facebook Messenger, to start a video conference with your friends. You didn't need to register and you could stay in the chat app, but you were using the video technology developed by the team of engineers at Tel Aviv-based Rounds to see and talk to one another, on platforms that didn't have group-video chat capabilities yet. While Rounds had built up a respectable 50 million registered users since 2009, Booyah quickly racked up a million users and, more importantly for its creators, caught the attention of some of the popular chat apps it was being used on. Several reached out to Rounds, says its founder and CEO Dany Fishel, who won't give names.

From Apple to Zoom: How to stay connected with your friends with video chats

If you're staying close to home but still want to socialize, there's an app for that. Actually probably more than you know. Video chat apps are clearly seeing a spike on the app charts. Zoom Cloud Meetings, which is designed for enterprise but free to use in any arena, is currently in the top 10 of Apple's free iOS app chart at No. 9, followed by Facebook's Messenger (used primarily for video chat) at No. 11. The Facebook-owned WhatsApp (also primarily chat) is No. 23.

Facebook just released its Houseparty killer to win back the teens

Facebook has unleashed an attack on yet another teen app. The social networking giant is testing Bonfire, a group video chat app that is quite similar to Houseparty, The Next Web reported Wednesday. Bonfire has the tagline "Your friends, your fire" and allows users to chat with multiple Facebook friends at once via live video. Again, similar to Houseparty, each person's live feed divides up a part of the smartphone screen. While the app is only available to download from the Danish iOS App Store, we were able to test it out via an invite from The Next Web's Matt Navarra.