A report released today by the White House Office of Science and Technology Policy (OSTP) shows the Trump administration is proposing to increase non-defense R&D spending on artificial intelligence (AI) and quantum information science by 30% next year, taking the total to $2.2 billion. The news comes against a backdrop of heightened tensions between the United States and China over a range of technology issues, including a U.S. move to force popular Chinese-owned social media app TikTok to sell its American operations and another to frustrate the international expansion efforts of Chinese telecoms giants such as Huawei. Both countries see AI and quantum information science, which includes quantum computing and quantum-encrypted communications, as central to their future military and economic success. Military investment in AI and quantum science has been rising for some time. Speaking at a recent Forbes CIO event, Dana Deasy, the CIO of the U.S. Department of Defense, noted that battlefield commanders will need help with processing the mountains of data flowing into them in any future conflicts.

The White House's proposed budget for fiscal year 2021 includes sizable increases in federal funding for AI and quantum computing projects. All told, the overall increase in federal R&D funding is 6% compared to fiscal year 2020, reaching $142.2 billion. Although much of the funding is aimed at R&D and infrastructure investments like $25 million to begin research for a quantum internet, the tenor of the briefing included defense tones. In espousing the need to invest in quantum information science (QIS), an official on the call said the U.S. needs to stay ahead of China and Europe, which are investing in their own quantum computing projects. U.S. CTO Michael Kratsios was clear about American values as they pertain to AI. "I think with regards to some of our adversaries and others around the world [that] utilize this technology, it's imperative that the U.S. continues to lead in technologies like AI," he said. 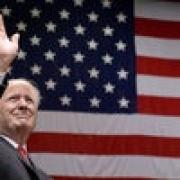 President TrumpDonald John TrumpTrump travels to Dover to receive remains of service members killed in Afghanistan Nadler demands answers from Barr on'new channel' for receiving Ukraine info from Giuliani Trump tweets scene from'Curb Your Enthusiasm' featuring'Make America Great Again' hat MORE's budget proposal unveiled Monday includes significant funding increases for research and development of artificial intelligence (AI) and quantum computing. If approved, the fiscal 2021 budget would double nondefense AI spending from roughly $973 million to almost $2 billion. It would also significantly boost quantum information science research by 50 percent compared with last year, with plans to double investment by 2022. "Last year, the President committed to investing in the Industries of the Future," Michael Kratsios, the White House's chief technology officer, said in a statement. "Now, he's delivering on this promise with a historic doubling of AI and quantum R&D investments that will fuel American leadership in these critical technologies for years to come. In the face of intense global competition, the FY 21 Budget affirms the importance of technology leadership to America's economic strength and national security," Kratsios added.

If the US is going to build a quantum internet and otherwise claim technical supremacy, it's going to need appropriate funding -- and that might be forthcoming. As the Wall Street Journal reports, The White House has proposed a 2021 non-defense budget that includes a roughly 30 percent increase in spending on AI and quantum computing. It would spend about $1.5 billion on AI work (versus $1.12 billion in 2020) and $699 million on quantum technology (versus $579 million). About $25 million of that spending would go toward the quantum internet plan. Other funds would go toward AI research institutes from agencies like the Agriculture Department and National Science Foundation. Other elements of the proposal aren't as specific, but emphasize the need for AI in healthcare (particularly during the pandemic) and "advanced manufacturing" for the next wave of quantum computing devices.

AI, Quantum R&D Funding to Remain a Priority Under Biden