This computer graphic image provided by the Japan Aerospace Exploration Agency (JAXA) shows two drum-shaped and solar-powered Minerva-II-1 rovers on an asteroid. Japanese unmanned spacecraft Hayabusa2 released two small Minerva-II-1 rovers on the asteroid Ryugu on Friday, Sept. 21, 2018, in a research effort that may provide clues to the origin of the solar system. JAXA said confirmation of the rovers' touchdown has to wait until it receives data from them on Saturday. Japan's Hayabusa 2 spacecraft has lowered two small rovers onto an asteroid in an epic mission to study the distant space rock. Preparations have been underway for the landing since the Japan Aerospace Exploration Agency's (JAXA) spacecraft reached the "dumpling-shaped" asteroid in June.

In newly released images from the MASCOT Lander, the surface of the asteroid Ryugu is'even crazier' than expected. According to scientists, the asteroid is covered in rough blocks and strewn with boulders. A Japanese spacecraft that successfully "bombed" an asteroid after a journey of more than 3 billion miles through space is close to returning to Earth. Japan's Hayabusa2 spacecraft is slated to drop at least 100 milligrams of the near-Earth asteroid, Ryugu, in Woomera, Australia, on Dec. 6. After that, it will continue its journey to visit additional asteroid targets. "We are now on a landing course for Earth," Hayabusa2 project manager Yuichi Tsuda said on Friday. 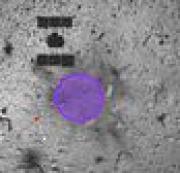 Footage of the moment a Japanese space probe briefly touched down on the surface of an asteroid has been released by Japan's space agency, JAXA. The incredible video shows the 59 seconds before Hyabusa 2 bounced off the surface of Ryugu and is played at five times real speed. Hyabusa 2 was travelling at a rate of 7 cm/s relative to the asteroid and fired a small probe at its surface to kick up debris. This can be seen darting upwards away from the 3,300 foot (1 kilometre) wide asteroid that was hopefully captured by the spacecraft's'sampler horn'. The camera on-board which captured the footage was funded by public donations.

Fox News Flash top headlines are here. Check out what's clicking on Foxnews.com. Japan's Hayabusa2 spacecraft successfully released a small capsule on Saturday and sent it toward Earth to deliver samples from a distant asteroid that could provide clues to the origin of the solar system and life on our planet, the country's space agency said. The capsule successfully detached from 220,000 kilometers (136,700 miles) away in a challenging operation that required precision control, the Japan Aerospace Exploration Agency said. The capsule -- just 40 centimeters (15 inches) in diameter -- is now descending and is expected to land Sunday in a remote, sparsely populated area of Woomera, Australia. SPACECRAFT THAT SUCCESSFULLY'BOMBED' AN ASTEROID IS CLOSE TO HOME WITH VALUABLE CARGO "The capsule has been separated.