Mike wants to save a video from Facebook. I can almost hear you saying, "Hold on Josh--when I watch a Facebook video on my PC there aren't any links to save it!" Correct, but all you have to do is trick your browser into thinking you're browsing Facebook on your phone. Delete the'www' in front of the URL and replace it with the letter'm' so the links look like this: Replace the w's with an m to view the mobile version. Hit Enter to open the mobile version of the video and click Play on the video. 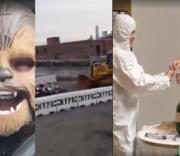 On the left side of the map is a list of the most-watched videos currently on Facebook Live. On a Monday morning, that might include 9,000 people watching a South Asian actress read through her comments, a couple thousand people watching a Time-hosted Game of Thrones recap conversation, a prayer circle, and a feed from the Yale graduation. On a Tuesday afternoon, a thousand people might be watching "public figures"--that's Facebook's term--like Sean Stephenson, a therapist and motivational speaker with brittle bone disease, or Tom Cassel, a video gamer also known as The Syndicate Project, who has 9.75 million subscribers to his YouTube channel and 2.4 million followers on Twitch. But the more common type of most-watched videos is either television or what feel like DVD extras from television. A thousand people watch The U.K.'s Channel 4 broadcast of the Prime Minister's Question, the notoriously quippy weekly session when the PM answers questions from Parliament.

St. Louis boy begs people to 'stop killing each other'

That was a 6-year-old boy's message to the people of St. Louis in a Facebook video that's been viewed more than 90,000 times. "I'm scared to die," Jeffrey Laney, a kindergartener, said in the Facebook video that his mother, Leanndra Cheatham, posted last week. "I feel bad about people killing each other." "Jeffrey saw me really sad when my cousin died," Cheatham told Fox News, of why her son implored people to stop the violence. "I didn't know he remembered or even listened when I talked about the death of my cousin."

The first example is this 30-second video which falsely claims to depict Hurricane Irma devastating the islands of Antigua and Barbuda in the Caribbean. The video, which was shared on Facebook by Hendry Moya Duran, attracted more than 27 million views and more than 789,000 shares. However, the footage he used is at least more than one year old, and it allegedly shows a tornado that hit Dolores, Uruguay, in May 2016, according to several comments on this YouTube video from that time. I can attest that this is not Antigua, St Martin, or Barbuda. The Facebook video even tricked a meteorologist into believing it was actually from Irma.

How to Turn Off Facebook's Pesky Live Video Notifications

Facebook believes the best way of promoting Facebook Live Video is to notify you about it. And so you get a notification whenever someone you're connected to uses Live Video. You probably have hundreds, if not thousands, of friends, bands, brands, and pages you follow. The incessant notifications can quickly get out of hand. Yes, Facebook Live is great.