The Beatles' 'All You Need Is Love': It was 50 years ago today

"Boys, I have the most fantastic news to report," Beatles manager Brian Epstein announced one day in 1967 to his most famous clients. "You have been selected to represent England in a television programme which, for the first time, ever, will be transmitted live around the world via satellite. The BBC shall actually be filming you making your next record." A collective yawn, engineer Geoff Emerick wrote in his 2006 autobiography, "Here, There and Everywhere: My Life Recording the Music of the Beatles." John and Paul exchanged blank looks for a moment," Emerick recounted.

The Beatles' 'Sgt. Pepper' album to get deluxe 50th-anniversary edition 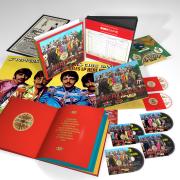 The most ambitious reissue yet of an individual album from the Beatles' catalog is coming May 26 with an expanded and newly remixed edition of the Fab Four's 1967 pop masterpiece, "Sgt. Consistently ranked by critics and fans among the most influential rock albums of all time, "Sgt. Pepper" is being reissued in multiple formats and editions, including new stereo and surround-sound audio mixes along with nearly three dozen previously unreleased recordings from the same sessions. "It's crazy to think that 50 years later we are looking back on this project with such fondness and a little bit of amazement at how four guys, a great producer and his engineers could make such a lasting piece of art," Paul McCartney writes in a new introduction for the anniversary edition of a project that started out as his baby. In a 1970 interview with Rolling Stone, John Lennon said, "It was a peak.

The Accidental Perfection of the Beatles' White Album

To mark this month's fiftieth anniversary of the Beatles' ninth album, "The Beatles"--universally known as the White Album--several new expanded and enhanced editions are being released this week. These new versions were created under the supervision of Giles Martin, the son of the album's original producer, George Martin. As was done last year with "Sgt. Pepper," the new editions contain, along with a wealth of archival recordings and other material, a brand-new, digitally remixed presentation--a laborious retrieval and reassembly of the contents of the original multitrack master tapes, with a comprehensive scope far beyond that of all previous remasters and releases. The result reveals what might be called the greatest record ever made, not only in terms of its innovation and its strange, impenetrable, endlessly suggestive beauty but also because of its place at the apex of the Beatles' career and its role as an aesthetic keystone for nearly all the rock-and-roll recordings that have followed.

Paul McCartney opened his 2016 One on One world tour on Wednesday night in, of all places, Fresno, at the Save Mart Center arena on the campus of Cal State Fresno. As he's been doing in recent years, along with return visits to major markets, the former Beatle and double Rock and Roll Hall of Fame inductee includes cities he has never visited, and chose to launch the new tour with his first performance in the Central Valley town of a half-million. No other California stops have been announced. In the beginning: For the first time on one of his solo tours, the show opens with "A Hard Day's Night," the title track from the Beatles' 1964 movie that begins with one of the most iconic chords in all of rock music. A giant video screen behind the stage projected scenes from the film and multiple other images from McCartney's life as he and the other four members of his touring band delivered meticulously arranged versions of more than three dozen songs from the Beatles and McCartney's solo career.

Giles Martin on mixing The Beatles' White Album: 'It slaps you in the face'

The Beatles are celebrating the 50th birthday of their 1968 double album - dubbed The White Album - with a deluxe edition that delves into the record's exhaustive recording sessions. An interview with producer Giles Martin, who oversaw the anniversary project, reveals some of the box set's secrets and surprises. The Beatles' ninth album has confounded, delighted and divided fans ever since its release in 1968. To some, it's their masterpiece: a vibrant explosion of ideas from a band no longer bound by format, genre or style. To others, it's a mess: a quixotic, fractured collection of songs that fails as often as it soars.