Save 15% on the Apple HomePod for the next few days

Fun fact: Microsoft Office's Clippy was among the first smart assistants made widely available to consumers. That same technology has since meandered over into the world of audio, where internet-connected speakers are now capable of pairing with other devices and being controlled by a listener's voice. With more and more electronics companies dipping their toes into the smart speaker marketplace to meet surging public demand, there are a lot of options for consumers to consider. But it's a newcomer that's got everyone else beat in terms of sound quality and high-tech features: the Apple HomePod. Introduced less than a year ago, the compact HomePod boasts the latest in audio technology. 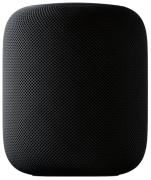 Having a compact portable speaker is great and all, but having a compact portable speaker that can adjust its own sound depending on where you take it is even better. Apple's Homepod is the first speaker that tunes itself. Using spatial awareness, it recognizes the dimensions of its location and adjusts the sound based on what's needed. Because of this, vocals and instruments are directed towards the middle of the room while ambient sound is projected and bounced off the sides. Your whole room will be full of rich sound.

Apple HomePod 2: rumors, news, and everything we know so far

Could Apple be about to release the HomePod 2, a smaller version of its Siri smart speaker? That's a question we've been asking ourselves for a while now now – and while Apple's iPhone X launch event on September 12, 2018 didn't reveal what the next HomePod will look like, the HomePod 2 could finally be on the horizon. Nearly a year has passed since then, and the iPhone 11 launch saw no mention of the new Apple HomePod Mini – so, everything is pointing to a 2020 release date. The speculation is that the next version of the HomePod, the Apple HomePod 2, may be a more compact version of the original, with the name Apple HomePod Mini being rumored. According to a Bloomberg report in July 2018, Apple may have been looking to release the HomePod 2 sometime in early 2019, which would make sense based on the release date of the original HomePod – of course, it never actually materialized.

Here's what we think about Apple's HomePod

If you are an Apple fan and use Apple Music, you might love the HomePod. That's if you're fine with dropping $350 on a smart assistant speaker. You can easily pair your HomePod to your iPhone and use "Hey Siri" voice commands. However, you can't ask HomePod to make calls, check your calendar, or search online. The music quality might make up for that.

Apple's HomePod smart speaker is lagging behind the competition in terms of sales, so the tech giant is rumored to be working on a low-cost model. A sketchy report over the weekend claims that Apple's low-cost HomePod might actually be released under the Beats brand. Apple is said to be working on the low-cost HomePod with chip supplier MediaTek, according to the Chinese website Sina. The report also claims that the cheaper HomePod model will be sold under the Beats brand, but it didn't give out other information related to specs, pricing or a potential release date. Rumors of a low-cost HomePod started back in March when a Chinese website claimed that the new device could sell for somewhere between $150 and $200.