June 2020 is off to a hot start for developers of autonomous mobile robots (AMRs). Yesterday, OTTO Motors announced a $29 million Series C, and today Locus Robotics closed $40 million in Series D funding. The Series D brings Locus' total amount of funding raised to $105 million. Locus' latest round was led by Zebra Ventures, the strategic investment arm of Zebra Technologies. Existing investors such as Scale Venture Partners also participated in the round. 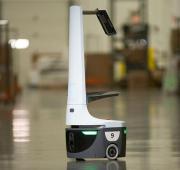 Locus Robotics, which makes autonomous, mobile robots for use in e-commerce fulfillment warehouses, just announced $25 million in a Series B round.

The COVID-19 pandemic is poised to accelerate adoption of autonomous mobile robots (AMRs) to ease supply chain backlogs. Even before the coronavirus pandemic shut down the global economy, leading companies that distribute large amounts of goods were deploying, or evaluating, AMRs such as DHL and Ryder. UPS yesterday announced that it has begun deploying AMRs in some of its facilities to consolidate orders. UPS wants to "create more custom and turnkey outsourced fulfillment services to meet our customers' unique supply chain needs," according to a statement from Philippe Gilbert, UPS's president of supply chain solutions. The weak link in warehouse automation efforts is the shortage of people to fulfill the steady rise in e-commerce transactions.

Locus Robotics Corp., whose robots help workers fulfill e-commerce orders, raised $25 million in a funding round led by Scale Venture Partners that the company plans to use to develop new products and expand into new markets.

It was Amazon that drove America's warehouse operators into the robot business. Quiet Logistics, which ships apparel out of its Devens, Mass., warehouse, had been using robots made by a company called Kiva Systems. When Amazon bought Kiva in 2012, Quiet hired scientists. In 2015 it spun out a new company called Locus Robotics, which raised $8 million in venture capital. Last year, Locus unveiled its own warehouse robotics solution called the LocusBot--first using it for its own business, then selling them to companies that ship everything from housewares to auto parts.