The battle to dominate China's theme park industry is heating up with Chinese conglomerate Dalian Wanda Group hiring a former Disney executive to oversee its theme parks. Wanda, which operates two domestic parks, has hired Andrew Kam, the former head of Hong Kong Disneyland, to be vice president of Wanda's Cultural Tourism Group. The position puts Kam in charge of the Bejing company's Wanda Cultural Tourism City in Nanchang and Wuhan Wanda Movie Park in Wuhan. The company's chairman, Wang Jianlin, also has promised to build nearly a dozen more parks. The move to hire Kam looks like a shot at Disney because Jianlin ridiculed Disney's 5.5-billion Shanghai theme park before it opened in June.

Raw video: House collapses into river in Guangxi region of China after heavy flooding in the area. BEIJING – Authorities deployed helicopters in western China on Tuesday to rescue people stranded by flooding as heavy rain swelled the Yangtze and other rivers to dangerous levels, state media reported. Landslides backed up a river, trapping 48 people on rooftops in Longnan city in the southern part of Gansu province, according to The Paper, an online news portal. Neighboring Sichuan province and Chongqing municipality both declared the highest-level flood control emergency, a first for Sichuan. In Sichuan, water lapped at the toes of the Leshan Giant Buddha -- a towering 8th-century statue carved into a mountainside -- for the first time since at least 1949, a government scenic management committee said.

Raw video: House collapses into river in Guangxi region of China after heavy flooding in the area. BEIJING – China suffered a double blow Wednesday of flooding and landslides from unusually heavy seasonal rains and a typhoon that came ashore on its southern coast. Five people were missing in Yunnan province in the southwest after a landslide destroyed two houses, the official People's Daily newspaper said. In Sichuan province, 21 vehicles parked in a square in Yibin city fell into a hole after the road beneath them collapsed in the middle of the night. No one was injured, according to media reports. 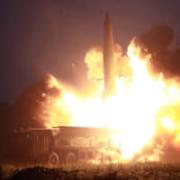 SHANGHAI/TAIPEI – China's film regulator on Wednesday said it was suspending mainland Chinese movies and their personnel from participating in Taiwan's annual Golden Horse Awards this year, without giving a reason. The China Film Administration made the announcement in a statement on its official WeChat account. The move comes after the event, the Chinese-speaking world's version of the Oscars, last year became a lightning rod for questions about Taiwanese independence, sparking a debate between Taiwanese and mainland stars as well as netizens. The state of ties between Beijing and the self-ruled island has since become more tense, with China announcing that it would stop issuing individual travel permits for Taiwan to Chinese travelers last week. "From an industry point of view, the Golden Horse was a good platform for exchanges on films among mainland, Taiwan and Hong Kong," said Dong Shu, a Shanghai-based film critic.

President Trump address false information put out by China that the U.S. military gave them coronavirus China on Tuesday escalated its tit-for-tat propaganda war with the United States over who's to blame for the spread of the coronavirus by placing restrictive measures on several top media companies including The New York Times, The Washington Post and The Wall Street Journal, prompting strong opposition from the Trump administration. It's just the latest move by Beijing to punish the U.S. for its reporting on the global pandemic, the origin of which has been traced back to Wuhan, China. "The Chinese Communist Party's decision to expel journalists from China and Hong Kong is yet another step toward depriving the Chinese people and the world of access to true information about China," the National Security Council tweeted. "The United States calls on China's leaders to refocus their efforts from expelling journalists and spreading disinformation to joining all nations in stopping the Wuhan coronavirus." In a statement, China claimed the new restrictions on U.S. reporters were a retaliation against the Trump administration for putting caps on the number of journalists from five Chinese state-run media outlets working in the United States last month.