Israel says it only shot at protesters charging Gaza border

Jerusalem – Israel's defense minister says troops acted appropriately by only firing on Palestinian protesters who charged toward Gaza's border with Israel. Avigdor Lieberman said Sunday that those who protested peacefully were not harmed, and he rejected accusations of excessive use of force in the mass protests Friday in which 15 Palestinians were killed. It was the area's deadliest violence in four years. Gaza's ruling militant Hamas group has touted the protests as the launch of a six-week campaign against the territory's decade-old blockade. Israel says thousands of Palestinians approached the border, with hundreds engaged in acts of violence ranging from rock-throwing to hurling firebombs to opening fire at Israeli troops guarding the border.

KHUZAA, GAZA STRIP – Thousands of Palestinians protested along Gaza's sealed border with Israel on Friday, engulfing the volatile area in black smoke from burning tires to try to block the view of Israeli snipers and cheering a Hamas strongman who pledged that the border fence will eventually fall. Israeli troops opened fire from across the border, killing at least nine Palestinians and wounding 491 others -- 33 of them seriously -- in the second mass border protest in a week, Gaza health officials said. A well-known Palestinian journalist was among the dead, and hundreds of others suffered other injuries, including tear gas inhalation, the officials said. The deaths brought to at least 31 the number of Palestinians killed by Israeli fire since the previous week. Early Saturday, Palestinian health officials confirmed that Yasser Murtaga had died from a gunshot wound sustained while covering demonstrations near the Israeli border in Khuzaa.

Gaza violence is latest salvo in war of narratives

JERUSALEM – Thousands of Palestinians on Friday took part in a mass protest along the Gaza Strip's volatile border with Israel, the second large-scale demonstration in what is expected to be a steady turnout over the coming weeks. Nearly 30 Palestinians were killed by Israeli fire in two mass protests over the past eight days. Gaza's Hamas rulers, who are orchestrating the demonstrations, say the protests are against a decade-old border blockade by Israel. But Israel accuses the Islamic militant group of using the protests as cover for trying to infiltrate the border and attack Israelis. It has warned that anyone approaching the border fence is risking their lives.

Demonstrators are lining up along the fence dividing Israel and Gaza. At least three of the 52 Palestinians reportedly killed Monday in clashes ahead of the Jerusalem opening of the U.S. Embassy to Israel were "armed terrorists" caught trying to plant a bomb near the Gaza border fence, Israel's military said. More than 35,000 protesters amassed at a dozen locations along the security fence, with many engaging in skirmishes that pushed the death toll Monday to the highest in Gaza since a 2014 cross-border standoff between the militant group Hamas and the Jewish state, according to the Associated Press. Gaza health officials told the news agency that 52 people so far have been killed in Monday's violence, and at least 772 have been wounded. May 14, 2018: Palestinian medics and protesters evacuate a wounded man during a protest at the Gaza Strip's border with Israel, east of Khan Younis, Gaza Strip. 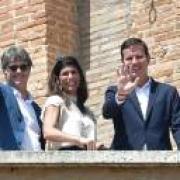 JERUSALEM – Israeli troops fatally shot two Palestinians who infiltrated the country from Gaza and attacked soldiers with explosives Sunday night, and in a separate incident killed another Palestinian who tried to breach the border, the military said. Another Palestinian was detained in the latter incident, and two more were caught trying to cross the border in a third case, the military said. The Gaza border has been tense in recent weeks, with the Islamic militant group Hamas that rules Gaza urging mass Palestinian protests there every Friday as part of a weeks-long campaign against a decade-old blockade of the territory. The protests have turned violent and 39 Palestinians have been killed during the unrest, which began March 30. Israel says that it is defending its sovereign border, including nearby communities, and that its troops target only instigators.