The World Health Organization on Thursday released new guidelines on the transmission of the novel coronavirus that acknowledge some reports of airborne transmission of the virus that causes COVID-19, but stopped short of confirming that the virus spreads through the air. In its latest transmission guidance, the WHO acknowledged that some outbreak reports related to indoor crowded spaces have suggested the possibility of aerosol transmission, such as during choir practice, in restaurants or in fitness classes. But the WHO said more research is "urgently needed to investigate such instances and assess their significance for transmission of COVID-19." The report follows an open letter from scientists who specialize in the spread of disease in the air -- so-called aerobiologists -- that urged the global body to update its guidance on how the respiratory disease spreads to include aerosol transmission. Based on its review of the evidence, the WHO said the coronavirus that causes COVID-19 spreads through contact with contaminated surfaces or close contact with infected people who spread the virus through saliva, respiratory secretions or droplets released when an infected person coughs, sneezes, speaks or sings. The new guidelines do, however, suggest people should avoid crowds and ensure good ventilation in buildings, in addition to social distancing, and encourage masks when physical distancing is not possible. 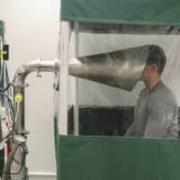 New York – At a University of Maryland lab, people infected with the new coronavirus take turns sitting in a chair and putting their faces into the big end of a large cone. They recite the alphabet and sing or just sit quietly for a half hour. The cone sucks up everything that comes out of their mouths and noses. It's part of a device called "Gesundheit II" that is helping scientists study a big question: Just how does the virus that causes COVID-19 spread from one person to another? People expel particles while coughing, sneezing, singing, shouting, talking and even breathing. But the drops come in a wide range of sizes, and scientists are trying to pin down how risky the various kinds are.

Over 200 scientists have called for the world to take more precautions against the airborne transmission of the coronavirus. While the virus is known to spread through the air via large droplets produced when people cough or sneeze, they say it can also be spread by smaller droplets known as aerosols that can linger in the air. Preventing this means ventilating buildings and avoiding overcrowding. "Hand-washing and social distancing are appropriate, but, in our view, insufficient to provide protection from virus-carrying respiratory microdroplets released into the air by infected people," states a letter written by Lidia Morawska at Queensland University of Technology in Australia. It has been signed by 239 researchers.

Slate is making its essential coronavirus coverage free for all readers. Subscribe to support our journalism. In early July, a group of scientists authored an article outlining the evidence for COVID-19 being an airborne disease. It made plenty of headlines, which was, frankly, a bit confusing. Didn't the public already know that COVID-19 was a respiratory illness?