Discrete manufacturers are no strangers to change. But lately, even "change" is beginning to feel different. Customers are constantly raising the bar beyond the historical level of "good enough." Smaller players are expected to deliver quality products and services on the same global scale as their larger competitors. Meanwhile, new competitors – from garage startups to nontraditional incumbents – are fueling disruption faster as demand for digital tools and experiences continues to grow.

U.S. to file 'statement of interest' in lawsuits against opioid makers, distributors

U.S. Department of Justice will file a "statement of interest" in a lawsuit against drug manufacturers and distributors. 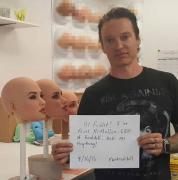 Sex dolls of the future will have artificial intelligence built in - so the dolls can simulate love. The futuristic advance has been shared by the boss of one of the world's most successful sex doll manufacturers. Matt McMullen, CEO of RealDoll, revealed the next step in making the high-end sex toys will be to give them AI to replicate humans more closely than ever. "We are building an AI system which can either be connected to a robotic doll OR experienced in a VR environment," he revealed as part of an AMA (ask me anything) on Reddit . "I think it will allow for an option that never existed before, and for some, may represent a happiness they [users] never though they could have.

I work for a robotics company. I'm sure you can imagine the rush that comes when the latest predictions about the growth of the market peg the opportunity on the fast-track to exponential growth. After all, it's how I make my living. For collaborative robots (cobots), the news seems to be all good. Last fall, a report crossed my desk touting CAGR of 57 %, resulting in a market size of $4 billion by 2023; another reported that 150,000 cobots would be deployed worldwide by 2020.

There is a critical need to hire people who can mine these bits and bytes of information and work more closely with customers to use the data to improve equipment performance and open new revenue streams. Indeed, the anticipated efficiency returns from digitization over the next five years across all major industrial sectors are substantial: nearly 3 percent in additional revenue and 3.6 percent in reduced costs per year, according to a recent PwC survey of companies. By proactively leading the digitization effort, industrial manufacturers can earn a growing portion of these gains.