AMD's Radeon RX 6600 is the first true 1080p graphics card of this generation, finally. It's fast and incredibly power efficient, but has a high price (that will soar even higher on the street) and isn't a great 1440p option. Well over a year after this generation of graphics cards kicked off, AMD is releasing the first true 1080p GPU of the lot with the Radeon RX 6600, which is being both announced and launched today. Sure, the step-up Radeon RX 6600 XT ostensibly targets high-refresh rate 1080p gaming, but it's massively overkill for gaming on a standard 60Hz monitor. And the rival GeForce RTX 3060 doesn't offer enough GPU grunt for no-compromises 1440p, but Nvidia ladened it with a ludicrous 12GB of VRAM, which contributes to its sky-high street price. The Radeon RX 6600 offers very good Ultra-quality 1080p gaming paired with 8GB of GDDR6 memory, a remarkably sane combination.

AMD Radeon RX 6700 XT review: A good GPU that (understandably) costs too much

"There are no bad products, only bad prices." That well-worn adage, attributed to Anandtech founder Anand Shimpi, kept popping into my head as I reviewed AMD's Radeon RX 6700 XT. This is a barn-burning graphics card for 1440p and 1080p gaming, but at $479 the price is far too high--at least in theory. In reality, graphics cards have been almost impossible to find thanks to a crushing mixture of supply shortages, insane demand for all gaming hardware, logistics woes, tariffs, and the mania swirling around the booming Ethereum cryptocurrency. Newly stocked graphics cards sell out instantly at proper retailers and go for hundreds of dollars over MSRP at resale sites like Ebay and Craigslist.

Welcome back to the high end, AMD. For the first time since the days of the Radeon R9 290X--seven long years ago--AMD's Radeon group is prepared to unleash enthusiast-level graphics cards that can do battle with Nvidia's best and brightest. During the company's second "Where Gaming Begins" event on Wednesday, AMD revealed a trio of Radeon GPUs based on a new RDNA 2 architecture, all armed with "revolutionary Infinity Cache" technology, sky-high clock speeds, and interesting synergies with Ryzen. They take direct aim at Nvidia's RTX 30-series offerings, culminating in a $999 Radeon RX 6900 XT that seeks to seize the gaming crown from the monstrous $1500 GeForce RTX 3090 when it launches December 8--for $500 less than Nvidia's beastly GPU costs. The $579 Radeon RX 6800, meanwhile, will go toe-to-toe with the $500 RTX 3070 releasing tomorrow, and the $649 Radeon RX 6800 XT intends to challenge the $700 RTX 3080. 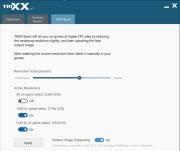 The Sapphire Pulse delivers a whisper-quiet spin on AMD's affordable Radeon RX 6500 XT, with the company's Trixx Boost software giving performance a helping hand. It's a good option for newcomers to PC gaming as long as you operate within limits imposed by the unusual technical configuration of AMD's GPU. AMD's Radeon RX 6500 XT is a humble graphics card built to bring 1080p gaming to the masses at a time when the masses haven't had an affordable GPU option for years. Sapphire's popular "Pulse" brand relentlessly focuses on delivering solid gaming experiences without cost-adding frills you may not want. On paper, it sounds like a peanut butter and jelly-type situation. But does the Sapphire Pulse Radeon RX 6500 XT, which retails for AMD's $199 suggested price, hold up in practice?

Nearly nine long months after the Radeon RX 6800 and 6800 XT GPUs launched, AMD's radical new RDNA 2 architecture is finally coming to the midrange--though the midrange sure is a lot more expensive in the midst of a crippling graphics card shortage. At ChinaJoy on Thursday evening, AMD announced the long-awaited Radeon RX 6600 XT for "epic 1080p gaming" at high refresh rates, with a not-so-epic $379 price tag. We'll get to performance in a moment but need to start with the elephant in the room: the price. The graphics card the RX 6600 XT is replacing--the last-gen Radeon RX 5600 XT--launched a full $100 cheaper, at $279. It, too, was positioned as a no-compromises 1080p offering.