Andreas Mershin visits with one of the trained disease-sniffing dogs in his office at MIT. The dogs are trained and handled in the UK by the organization Medical Detection Dogs. Trained dogs can detect cancer and other diseases by smell. A miniaturized detector can analyze trace molecules to mimic the process. Numerous studies have shown that trained dogs can detect many kinds of disease -- including lung, breast, ovarian, bladder, and prostate cancers, and possibly Covid-19 -- simply through smell.

Who's the better strawberry farmer, a human or AI?

Using powerful analytical tools including gas chromatography mass spectrometry (GCMS) and microbial profiling, "if you analyze the samples from, let's say, skin cancer and bladder cancer and breast cancer and lung cancer -- all things that the dog has been shown to be able to detect -- they have nothing in common." Yet the dog can somehow generalize from one kind of cancer to be able to identify the others. He envisions a day when every phone will have a scent detector built in, just as cameras are now ubiquitous in phones. Such detectors, equipped with advanced algorithms developed through machine learning, could potentially pick up early signs of disease far sooner than typical screening regimes, he says -- and could even warn of smoke or a gas leak as well. They then applied a machine-learning program to tease out any similarities and differences between the samples that could help the sensor-based system to identify the disease.

AI System Can Sniff Out Disease as Well as Dogs Do

Most people consider smell their least important sense, surveys suggest. Dogs, however, feel their way through the world with their noses. Humans already employ the animals' olfactory acuity for contraband and explosives detection. More recently it has also proved uncannily good at sensing cancers, diabetes--and even COVID-19. Exactly how dogs detect diseases is a mystery, but that has not stopped researchers from mimicking this prowess with an artificial-intelligence-based noninvasive diagnostic tool.

Dogs that can smell prostate cancer could inspire 'robotic noses'

Dogs that can smell prostate cancer could inspire'robotic noses' to sniff out the disease, in a technique dubbed'machine olfaction', a new study reveals. In a pilot study, British and US researchers trained dogs to detect aggressive prostate cancer from people's urine samples. Dogs have an extremely sensitive sense of smell and can pick up on'volatile organic compounds' (VOCs) released during the early stages of many cancers. The scientists then used the data to create an artificial neural network that could detect the cancer-specific chemicals that the dogs could smell. The hope is that the dogs' performance can eventually be replicated and used in technology such as an app on a smartphone. 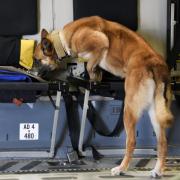 "We have $100 million worth of equipment downstairs. And the dog can beat me?" MIT scientist Andreas Mershin asks. "That is pissing me off." Mershin aims to develop a bot that detects an antigen that can be an indicator of prostate cancer. It's one that properly trained dogs can sniff out with 90% accuracy.