Sunrise is officially dead, but Microsoft just added a new feature to the Outlook iOS calendar that might help you forget it. In a trick borrowed from the desktop app, the iOS version of Outlook has a new scheduling assistant that makes it fairly easy to book a meeting. All you need to do is create an event and add coworkers in the "people" field, then choose the date picker. From there, you can see times in white, yellow or red, indicating spaces where everyone is available (or not). Then, you can tap the time picker and drag it around until it turns green, giving you a slot that works for everyone.

iPhone X adoption is already outpacing the iPhone 8 and 8 Plus: report

In the hours and days following the retail availability of the eagerly-anticipated iPhone X, it's easy to feel like Apple played us. There were no reports of shortage at stores, just hours and hours of amateur unboxing videos. Now, according to a new report from Localytics, we know that iPhone X is outpacing the iPhone 8 and 8 Plus engagement in its first week of availability. The firm examined more than 70 million iOS devices and found that a whopping 0.93 percent were iPhone X smartphones. It's true: less than one percent doesn't sound good at all, but let's put this in context. Microsoft Bookings has grown tremendously since its inception several years ago, and as it has matured and we have received your feedback, we have added more features and capabilities. Enterprises offer a variety of different services to a variety of different people; therefore, they need a solution that is both versatile and customizable. That's where Bookings comes in. With Bookings, a large enterprise can create booking pages with relevant services and schedules for their many appointment needs. It can be used across the organization for internal or external appointments, and provides a simple, yet powerful solution to ease the hassle of scheduling appointments for both, the booking the appointments and those who provide the service. 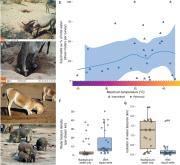 Water is scarce in dryland ecosystems. Some larger animals in these regions dig wells that may provide water to other species. This behavior may have been common among megafauna that are now extinct, especially in North and South America, where megafaunal extinctions were the most severe. Lundgren et al. tested whether feral equids (horses and donkeys) reintroduced to desert regions in the North American southwest dig wells that provide ecosystem-level benefits. They found that equid-dug wells increased water availability, were used by a large number of species, and decreased distance between water sources. Abandoned wells also led to increased germination in key riparian tree species. Such equid-dug wells improve water availability, perhaps replacing a lost megafaunal function. Science , this issue p. [491][1] Megafauna play important roles in the biosphere, yet little is known about how they shape dryland ecosystems. We report on an overlooked form of ecosystem engineering by donkeys and horses. In the deserts of North America, digging of ≤2-meter wells to groundwater by feral equids increased the density of water features, reduced distances between waters, and, at times, provided the only water present. Vertebrate richness and activity were higher at equid wells than at adjacent dry sites, and, by mimicking flood disturbance, equid wells became nurseries for riparian trees. Our results suggest that equids, even those that are introduced or feral, are able to buffer water availability, which may increase resilience to ongoing human-caused aridification. [1]: /lookup/doi/10.1126/science.abd6775