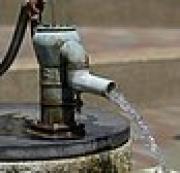 Up close with Mars: NASA's InSight lander reveals its seismometer is 'crouched' to hear sounds 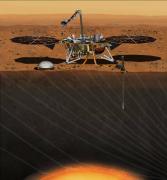 NASA released a 360-degree video showcasing a replica of its InSight Mars Lander being tested in simulated Martian conditions. The two-year-long InSight mission is targeted at penetrating deep into Mars and understanding the red planet's interior. The launch of the lander is still a few months away, but in order to test its ability to work in uncertain Martian conditions, the agency is looking at the replica of the robot on its own version of Mars created at the Jet Propulsion Laboratory in California. NASA scientists used crushed garnet as Martian sand and gravel and specialized light to see how the lander would settle on the uneven surface of the planet and adjust to the color and brightness of sunlight on it while doing all kinds of experiments. As garnet does not produce dust, the agency used piles of the material to check the deployment of lander's critical instruments – a high-precision seismometer for detecting quakes and measuring the planet's internal temperature, a shield isolating the seismometer from wind and temperature changes, and a heat-flow probe that digs up to 5 meters underground to measure the amount of heat escaping from the planet's interior.

Nasa's InSight lander will make it to Mars despite storm

Nasa is going ahead with the scheduled landing of its InSight mission, regardless of whether the red planet is still in the midst of a planet-wide dust storm. The space agency believes its InSight lander is more than capable of weathering the barrage from the red planet's winds. Some of the equipment on the InSight will not function correctly in the dust storm, however, the landing should not be affected. Violent Martian dust storms can start suddenly and last for weeks, or even months. The current storm, which now encompasses the entire planet, first started in May.

Mars is about to get its first U.S. visitor in years: a three-legged, one-armed geologist to dig deep and listen for quakes. NASA's InSight makes its grand entrance through the rose-tinted Martian skies on Monday, after a six-month, 300 million-mile (480 million-kilometer) journey. It will be the first American spacecraft to land since the Curiosity rover in 2012 and the first dedicated to exploring underground. The illustration shows the InSight lander drilling into the surface of Mars. InSight, short for Interior Exploration using Seismic Investigations, Geodesy and Heat Transport, is scheduled to arrive at the planet on Monday, Nov. 26 NASA is going with a tried-and-true method to get this mechanical miner to the surface of the red planet.