The head of Iran's nuclear program says the Islamic Republic has begun "preliminary activities for designing" a modern process for 20-percent uranium enrichment for its 50-year-old research reactor in Tehran, signaling new danger for the nuclear deal.

Iran will inform the United Nations nuclear watchdog in Vienna on Tuesday of its plan to begin the process of increasing the country's uranium enrichment capacity within the limits of the nuclear agreement, the country's atomic energy agency spokesman has said. "In a letter that will be handed over to the International Atomic Energy Agency (IAEA) ... Iran will announce that the process of increasing the capacity to produce ... UF6 (uranium hexafluoride) ... will start on Tuesday," Behrouz Kamalvandi told ISNA news agency. He said Iran had the capacity to accelerate production of centrifuges, which are used to enrich uranium. The UF6 is raw material for centrifuges. "The leader meant that we should accelerate some process ... linked to our nuclear work capacity to move forward faster in case needed," Kamalvandi said, referring to Supreme Leader Ayatollah Ali Khamenei. 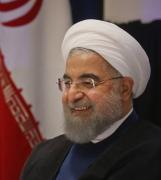 Iranian compliance also is due to tougher policing by U.S. President Donald Trump's administration of the 2015 pact to prevent Tehran from developing nuclear weapons, the Institute for Science and International Security said in a report due on Friday. A copy of the report was seen by Reuters. "One should expect many struggles to keep Iran within the nuclear limits for the duration of the deal." The report comes as Trump weighs whether to certify to Congress that Iran is complying with the agreement. He has until Oct. 16 to make that decision.

Iran has launched a plan to increase its uranium enrichment capacity with new centrifuges, raising the pressure on European diplomats scrambling to rescue the crumbling nuclear deal after the US pulled out. "If conditions allow, maybe tomorrow night at Natanz [plant], we can announce the opening of the centre for production of new centrifuges," said the vice-president, Ali Akbar Salehi, head of the Atomic Energy Organisation of Iran, according to conservative news agency Fars on Tuesday. "What we are doing does not violate the [2015 nuclear] agreement," he said, specifying this was just the start of the production process and "does not mean that we will start assembling the centrifuges". The International Atomic Energy Agency confirmed it had received a letter from Iran, which Salehi said was submitted on Monday and outlined Tehran's plans. Under the 2015 nuclear agreement that Iran signed with world powers, it has the right to build and test certain centrifuges, although detailed restrictions exist for the first 10 years on the types and quantities of the machines.

An Iranian factory has started to produce rotors for up to 60 centrifuges a day, upping the stakes in a confrontation with the United States over the Islamic Republic's nuclear work. The announcement by the head of Iran's atomic agency on Wednesday came a month after Supreme Leader Ayatollah Ali Khamenei ordered agencies to prepare to increase uranium enrichment capacity, if a nuclear deal with world powers falls apart after Washington's withdrawal. Under terms of the 2015 agreement, which was also signed by Russia, China, Britain, France and Germany, Iran agreed to curb its nuclear programme in exchange for sanctions relief. The other signatories have scrambled to save the accord, arguing it offers the best way to stop Iran from developing a nuclear bomb. Iran has said it will wait to see what the other powers will do, but signalled it is ready to get its enrichment activities back on track.