What Is A Feral Swine Bomb? Wild Pigs Are Growing And Causing Major Damage

While there are plenty of problems plaguing the world, Americans may be unaware that a feral swine bomb has become a major concern in the U.S. Wild swine, an invasive species that can harm health, the environment, and the economy, have been wreaking havoc across the country and causing $2.5 billion in damage, The Atlantic reports. Dale Nolte, the manager of the National Feral Swine Damage Management Program at the U.S. Department of Agriculture, revealed that the wild pig population is growing at a rapid rate. "I've heard it referred to as a feral swine bomb. To go from a thousand to two thousand, it's not a big deal. But if you've got a million, it doesn't take long to get to 4 [million], then 8 million," he said. To date, there are as many as 9 million feral pigs across at least 39 states across the U.S. The animals are likely a mix of domestic breeds and European wild boar.

Judge: Army Base Can Keep Getting Rid of Feral Horses

However, U.S. District Judge Elizabeth Foote in Shreveport also said a group created to protect the horses on Fort Polk may argue that some of them should be protected as descendants of those brought to the New World by Spanish colonists and then bred by Choctaw Indians.

In praise of the intelligent, indestructible L.A. coyote

How Far Should Humans Go to Help Species Adapt to Conditions We Created?

This story was originally published by Yale Environment 360 and is reproduced here as part of the Climate Desk collaboration. "I spent 15 years removing cats from fenced reserves and national parks," Katherine Moseby was saying. "And then, all of a sudden, I was putting them back in. It felt very strange to be doing that." It was a hot, intensely blue day in the Australian Outback, about 350 miles north of Adelaide. 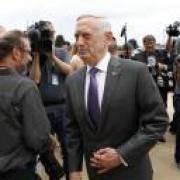 SYDNEY – Feral cats kill more than 1 million reptiles every day in Australia, a new study showed Monday, with the staggering slaughter threatening many species. Cats have wiped out entire populations of some animals in Australia since being introduced by Europeans settlers two centuries ago, with efforts to cull or sterilize them so far failing to slow their march. The new findings are based on more than 10,000 cat dietary samples contributed by environmental scientists across the country. In total, about 650 million lizards and snakes fall victim to feral and pet cats annually, they found. "On average each feral cat kills 225 reptiles per year," said lead researcher John Woinarski, from Charles Darwin University, adding that feral cats consume more reptiles in Australia than in the United States or Europe.