How Apple is training test drivers of its self driving car

Apple has outlined a plan to train operators of self-driving cars in documents submitted to California regulators earlier this month, the latest clues to the company's autonomous vehicle technology aspirations. Apple was granted a permit to test self-driving cars on April 14 by the California Department of Motor Vehicles but the company has never said anything about its plan. The state released 41 pages of Apple application documents to Reuters that give some clues about the company's highly secret self-driving effort, which it has never openly acknowledged. The state released 41 pages of Apple application documents including details of how Apple plans to test the car to teach it how to drive. The iPhone maker joins a long list of carmakers, start-ups and technology rivals, including Alphabet's Waymo, that are testing cars on state roads.

Apple's secretive self-driving car project just got a little less mysterious. The Cupertino-based company was granted a permit by the California DMV to test cars on public roads in April, but the details on just what exactly it had planned were few and far between. We knew the permit applied to three self-driving Lexus RX540h SUVs, but not much more. Thanks to documents obtained by Business Insider, we now have a preliminary -- emphasis on preliminary -- look at how Apple intends to challenge Uber and Google in the race for self-driving dominance. The documents refer to something called the "Apple Automated System," and note that Apple uses both a Logitech wheel and pedals to operate the remote driving system.

From prototypes to mishaps, here's all you should know about driverless cars

Autonomous cars have been around for a while. Everyone from Tesla and Volvo to Google car and Uber have rolled out automated-driving vehicles. But it has not been a smooth ride so far. Just last week in Arizona, Uber Technologies' self-driving car was involved in an accident, killing a woman -- it was the first pedestrian fatality involving an automatic vehicle. Following this, Toyota has suspended US tests of driverless cars on public roads.

Beyond trendy names like Tesla and Alphabet chasing self-driving cars, a host of auto brands and other tech heavyweights are also investing in autonomous R&D. Private companies working in auto tech are attracting record levels of deals and funding, with autonomous driving startups leading the charge. Along with early-stage startups, VCs, and other investors, large corporations are also angling to get a slice of the self-driving pie. From autonomy to telematics to ride sharing, the auto industry has never been at more risk. Get the free 67-page report PDF. Using CB Insights' investment, acquisition, and partnership data, we identified over 40 companies developing road-going self-driving vehicles. They are a diverse group of players, ranging from automotive industry stalwarts to leading technology brands and telecommunications companies. This list is organized alphabetically and focuses on larger corporate players in the space (as opposed to earlier-stage startups). Companies working on industrial autonomous vehicles were not included in this analysis. A few of the companies or brands listed below belong to the same parent organization but are detailed separately if they are operating distinct autonomous development programs. Some companies are grouped together by key partnerships or alliances. Given the complex web of relationships between these players, other collaborations are also noted in each profile. This is not intended to be an exhaustive list of corporations working on autonomous vehicle technology. This brief was originally published on 9/25/2015 and featured 25 select corporations. It was updated and expanded on 5/17/2017, 9/4/2018, and 8/28/2019. Over the last decade, Amazon has spent billions of dollars working on finding ever-better solutions to the last-mile problem in delivery. It's built its own fleet of cargo jets, explored delivery by drone in the form of "Prime Air," and more. More recently, an increasing percentage of that investment has been directed toward autonomous vehicle technology. In February 2019, Amazon invested in Aurora Innovation, an autonomous tech startup run by former executives from two other firms with strong ties to self-driving technology: Google and Tesla. "Autonomous technology has the potential to help make the jobs of our employees and partners safer and more productive, whether it's in a fulfillment center or on the road, and we're excited about the possibilities." The Aurora investment isn't the only autonomous technology play that Amazon is pursuing. In January 2019, the company introduced the Amazon Scout, a six-wheeled electric-powered delivery robot. 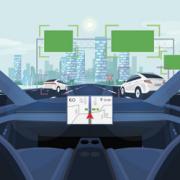