Adobe shows glimpse of future at MAX conference, and it's in A.I.

Artificial intelligence inside Adobe Creative Cloud could soon help creatives, well, spend more time being creative. At Adobe's 2016 MAX Conference, which starts on November 2, the company announced a new framework for Creative Cloud using artificial intelligence, called Adobe Sensei. Along with the new AI additions, Adobe unveiled several new programs and updates that show where the design software giant is headed in the next several months. Highlights of the company's first-day announcements include enhanced virtual reality tools inside Adobe Premiere Pro, design tools for merging 2D and 3D design, expansion of the Adobe Stock platform, and several other Creative Cloud updates from Adobe Experience Design to Photoshop. Adobe Sensei is expected to take the artificial intelligence that Adobe is already using – like facial recognition and the content-aware tools inside Photoshop, for example – and leverage additional machine learning techniques to automate the more mundane tasks inside the Creative Cloud, Adobe Document Cloud, and Adobe Marketing Cloud.

Entry level positions require at least a bachelor's degree while positions entailing supervision, leadership or administrative roles frequently require masters or doctoral degrees. Candidates can find degree programs that offer specific majors in AI or pursue an AI specialisation from within majors such as computer science, health informatics, graphic design, information technology or engineering. AI and machine learning involve software that has been programmed to interact with the world in ways that would otherwise be thought of as human. AI depends on knowledge about the world as well as programs or algorithms to intelligently process that knowledge. Today, most AI programs are specifically coded to do one task. 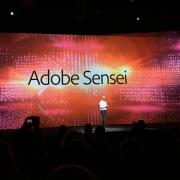 Ten thousand creatives and designers, have descended on San Diego for the annual pilgrimage that is Adobe Max, showcasing the 2017 updates to its all-powerful Creative Cloud suite of software. Principal among its announcements was Adobe Sensei, the company's latest foray into artificial intelligence that will work across all three of its clouds – Document, Marketing and Creative. According to Adobe, Sensei (the Japanese word for teacher) is a new framework and set of intelligent services for dramatically improving the design and delivery of digital experiences. Adobe Sensei's intelligent services tackle today's complex experience challenges – including image matching across millions of images, understanding the meaning and sentiment of documents and finely targeting important audience segments – leveraging machine learning, artificial intelligence (AI) and deep learning capabilities. This announcement builds upon the machine learning capabilities unveiled in Adobe Marketing Cloud at Adobe Summit in March.

To master Adobe Creative Cloud is to check a monumental prerequisite off your design career list. But it's easier said than done. This industry standard software suite is dense; some people spend years learning just one application. But with the Pay What You Want Adobe CC Lifetime A-Z Bundle, you can navigate the ins and outs of all the major Creative Cloud apps for whatever you can afford right now. Here's what you can expect from each course: Add a higher level of professionalism and pizazz to your videos by implementing motion graphics and visual effects.

If you want to land a great JavaScript job or catch up on important tech for 2020 and important technologies in the new decade, this post is for you. The point of this post is not to tell you which tech stacks and frameworks are the "best" or most loved or most popular -- but to shed some light on which ones give you the best odds of landing a great job in 2020 and beyond. We're going to look at data from a variety of sources: None of these metrics are perfect, but for our purposes, the npm download counts and job postings get the most weight, and when we look at the metrics in aggregate, they paint a clear and consistent picture of the JavaScript technology landscape and trends. Is it a good idea to select a framework to learn based on these metrics? That depends on your goal. Since we have a clear goal -- learning ROI for job seekers -- that makes the task much easier than trying to tell you what's best for everyone.