Biden Warns Of 'Responses' If N.Korea 'Choose To Escalate'

President Joe Biden said Thursday the United States will "respond accordingly" if North Korea escalates its missile testing. "We are consulting with our partners and allies," Biden said at his first White House press conference. "And there will be responses if they choose to escalate. Biden told reporters he was "prepared for some form of diplomacy" with North Korea but it "has to be conditioned upon the end result of denuclearization." President Joe Biden said the US will'respond according' if North Korea escalates its missile testing Photo: AFP / Jim WATSON North Korea fired two suspected ballistic missiles into the sea Thursday, in its first substantive provocation to Biden's new administration.

China aims to boost ties with North Korea and Russia in wake of U.S. talks

China is looking to boost ties with North Korea and Russia following a contentious meeting with U.S. officials in Alaska last week. "We are willing to work hand in hand with North Korean comrades to maintain, consolidate and develop China-North Korean relations," verbal messages delivered on behalf of Chinese President Xi Jinping to North Korea said, according to the official Xinhua News Agency. The messages come after senior U.S. diplomats visited Japan and South Korea before the meeting with their Chinese peers, as Washington seeks to shore up its alliances in Asia. U.S. President Joe Biden has said he wants to work with "like-minded countries" to forge a common approach to China. Beijing may also be taking stock of its own allies, with a visit from Russian Foreign Minister Sergei Lavrov this week.

Prime Minister Yoshihide Suga is still willing to meet with North Korean leader Kim Jong Un, the government's top spokesman said Tuesday, after the White House ruled out a summit between Kim and U.S. President Joe Biden in the near future. The remarks by Chief Cabinet Secretary Katsunobu Kato apparently reflect Tokyo's hope for progress in efforts to secure the return of Japanese nationals abducted by North Korean agents in the 1970s and 1980s but could be seen as a break from Washington. Suga had said after taking office last September he would inherit predecessor Shinzo Abe's willingness to meet with Kim "without preconditions." Asked at a news conference Tuesday whether the offer still stands following the remarks from the White House, Kato said Suga "firmly maintains" the stance taken by Abe. Biden has said the United States would "respond accordingly" if North Korea chooses to further raise tensions following last week's ballistic missile test, but also said the door remains open for "some form of diplomacy."

U.S., Japan and South Korea agree to keep up pressure on North Korea

Washington – The United States, South Korea and Japan agreed in high-level security talks on Friday to work together to keep up pressure on North Korea to give up its nuclear and ballistic missile programs. In a joint statement after a day of talks, new U.S. President Joe Biden's national security adviser, Jake Sullivan, and his Japanese counterpart, Shigeru Kitamura, and South Korea's national security adviser Suh Hoon reaffirmed their commitment to address the issue "through concerted trilateral cooperation towards denuclearization." The three countries also agreed on the need for full implementation by the international community of U.N. Security Council resolutions on North Korea, "preventing proliferation, and cooperating to strengthen deterrence and maintain peace and stability on the Korean Peninsula," the statement said. The national security advisers also discussed the value of working together to address other challenges such as COVID-19, climate change and promoting an immediate return to democracy in Myanmar, the statement said. The talks held at the U.S. Naval Academy in Annapolis, Maryland, were the most senior-level meeting between the three allies since Biden took power on Jan. 20 and came against a backdrop of rising tensions after North Korean missile launches last week. 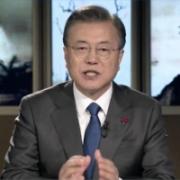 U.S. President Joe Biden and his South Korean counterpart, Moon Jae-in, agreed to upgrade their partnership and cooperate on strategy for North Korea, seeking to shore up an alliance shaken by Trump administration policies. Biden and Moon agreed on the need to make a comprehensive policy toward Pyongyang and closely cooperate for the denuclearization of the Korean Peninsula, South Korean presidential spokesman Kang Min-seok said in a briefing Thursday after the call. Moon also acknowledged the importance of U.S.-South Korea-Japan security cooperation, and discussed international issues relating to China and Myanmar, Kang added. Ties between the allies were tested under U.S. President Donald Trump, who repeatedly accused South Korea of short-changing the U.S and demanded a fivefold increase in payments to support the 28,500 American troops based there. In October, the Trump administration further strained the seven-decade-long alliance when, for the first time, it withheld the U.S. commitment to maintaining troop levels in South Korea.