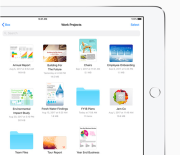 Apple and Cisco announced Monday that they're partnering up with insurer Allianz and risk evaluator Aon to offer discounts on cyber insurance to joint business customers.

Samsung Electronics and LG Electronics formed a partnership after Foxconn's Sharp halted its LCD supplies to the Galaxy S9 maker two years ago. However, the first ever partnership between the crosstown rivals appears to be experiencing a problem. The Investor learned from industry sources earlier this week that LG Display's planned LCD supply to Samsung has been delayed for more than a year. The reason cited is the fact that the two companies have yet to finalize the specifics in their deal. Sources said LG and Samsung have yet to reach a final decision on supply volume and price because of the volatilities in the present market.

In September, our attention turns from the multiplex to the small screen. But while Luke Cage's tale of reluctant heroism is made possible by a partnership between Marvel and Netflix, it's not the only property based on some stunning corporate synergy. The TV miniverse is a joint product of DC Comics (which created the comics the shows are based on), Warner Bros. Television (which coproduces and distributes the shows), the CW (which airs the shows), and CBS (which owns half of the CW). In today's landscape of media conglomerates and vertical integration, everything we watch on TV (or play on consoles or see in theaters) is the product of more partnerships than we can even keep track of--but that's not going to stop us from trying.

Jackson's partner was supposed to handle half the company's workload, but that didn't happen. So, Jackson began taking on more of the responsibilities. When Jackson tried to discuss the division of work, "she was a little defensive at first, and asked me to be patient." The situation didn't improve, and they agreed to part at the end of last year, just three months after the partnership began. But under their partnership agreement, drawn up without an attorney, dividing the company's assets would have weakened it financially.