The DOJ's China Initiative Dragnet Is Over. But the Aftereffects Will Be Felt for Years.

Nearly three years ago, a University of Kansas chemistry professor named Feng "Franklin" Tao was arrested and accused of concealing his work for a Chinese university. His arrest "disrupted the transfer of American intellectual property to China," then-Assistant US Attorney Tony Mattivi would tell the New Yorker. It also inaugurated a new stage in the China Initiative, a Trump-era Justice Department program aimed at fighting Chinese espionage. Tao became the first academic charged under that program. The Biden administration ended the China Initiative in February after years of heated criticism from academics and Asian American advocates, who have decried the program as overzealous and far-removed from its original national security goals.

Fox News senior strategic analyst reacts to the trial of a Harvard University professor charged with hiding his ties to a Chinese-run recruitment program. As Dr. Charles Lieber returns to a federal courtroom in Boston, Massachusetts, analysts say the Harvard professor's trial is a major test for a controversial U.S. government initiative to safeguard sensitive American technology and research. "This case is a barometer for the Justice Department's China Initiative, which is intended to cut down on trade secret theft and to counter China's efforts to blur the lines between academia, military research and the private sector," said Craig Singleton, an adjunct fellow at the Foundation for Defense of Democracies (FDD). Chinese President Xi Jinping said that any attempts to divide China will end in "crushed bodies and shattered bones." This month, FDD published a report detailing dozens of American universities receiving millions from the Pentagon and other federal agencies and their ties to Chinese universities that support China's military.

How a Book About America's History Foretold China's Future

In unprecedented times, much can be gleaned from the books we read. After the 2016 election, Hannah Arendt's "The Origin of Totalitarianism" went out of stock on Amazon as Americans tried to place their sense of doom within the arc of Western history. After the U.S. Capitol Hill riots, last year, a similar meaning-making unfolded in China. On January 12, 2021, Wang Wen, a columnist for Guancha, a nationalist news Web site based in Shanghai, noticed that an out-of-print book had shot up more than three thousand times its original price. On Kongfuzi, an online secondhand bookstore, used copies of "America Against America," a 1991 travelogue by the political theorist Wang Huning, at one point cost twenty-nine hundred dollars. 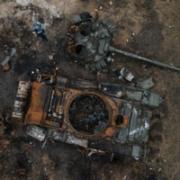 As Europe's largest conflict since World War II rages in Ukraine, top aides in the administration of U.S. President Joe Biden are increasingly convinced it could provide the U.S. with an unexpected advantage -- against China. U.S. officials see the conflict's toll and the slew of sanctions placed on Moscow as leaving Russia hobbled for years to come. Combined with bolstered European defense spending, that means the U.S. may have a freer hand to accelerate its long-term shift toward focusing on China, viewed as America's biggest future challenge, according to several officials. Your browser's ad blocking or security software may be the cause. Please add www.japantimes.co.jp / buy-ap.piano.io to your allowed sites to continue reading.

FCC revokes China Telecom's ability to offer services in the US

The Federal Communications Commission has revoked the ability of China Telecom Americas to operate in the US. Citing national security concerns, the agency voted unanimously in favor of a proposal it had been considering since the end of 2020. With today's order, the company, a subsidiary of China's largest state-owned carrier, has 60 days to discontinue telecom services in the US. Following a proceeding that involved input from the Justice Department, the FCC found that China Telecom is likely to comply with requests from the Chinese government, affording the country the opportunity to access, store, disrupt and misroute US communications. "Promoting national security is an integral part of the Commission's responsibility to advance the public interest, and today's action carries out that mission to safeguard the nation's telecommunications infrastructure from potential security threats," the FCC said.