The £1.3bn finance firm that was conceived in a pub

This week we speak to Samir Desai, founder of peer-to-peer lender Funding Circle. Friends often share money-making ideas over a few drinks in a pub, but it is not often that the scheme in question ends up creating a billion pound business. But that is ultimately what happened after Samir Desai first discussed his big vision with two old university mates when they met up for a few pints in a bar in central London in 2009. At the time the UK and the rest of the world were still mired in the maelstrom of the global financial crisis. As a result, banks had stopped lending to small businesses.

INFOGRAPHIC: FinTech And The Future 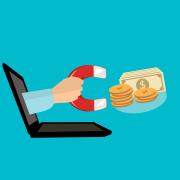 The infographic below focuses heavily on Peer-to-Peer lending, which is a system where loans are gained from multiple individuals, usually on a digital platform. This system bypasses traditional banks and credit bureaus and allows for individuals with less than ideal credit scores to obtain a loan. There are quite a few P2P platforms out there, including places like WeTrust, SALT, Dharma, and the GetLine Network. The latter is different than any other Peer-to-Peer lending platform to date, as they are decentralizing their entire platform with the Ethereum blockchain, and automating their loan processes through Ethereum's Smart Contracts.

Across China, more than 200 internet-based fund managers since late June have either shut down, closed parts of their operations or are reeling from cash crunches, missing executives and other problems, according to industry tracker Wangdaizhijia. The tide began to turn against the sector as an end-of-June deadline for new stringent registration regulations approached. With a slowing economy making it difficult for some companies to pay back loans, some lenders decided to shut down, analysts said. Investors, already souring on the sector, began pulling out funds, further pinching the lending platforms. "People are nervous about the whole capital chain," said Andrew Collier, an analyst at Orient Capital Research, who researches China's complex lending networks.

Random forest model using Lending Club public dataset shows opportunity to improve adjusted return by 2.75% Arimo recently performed a study using a public dataset provided by Lending Club with the goal of showing how machine learning could improve investor returns. To do this we used the PredictiveEngine component of our Data Intelligence Platform, which provides the ability to easily build a variety of predictive machine learning models which scale transparently when deployed on distributed parallel computing platforms. Lending Club is an online peer-to-peer lending company that connects borrowers with investors who have capital to lend. When a loan application is submitted by a borrower, Lending Club reviews and decides whether to offer a loan at a risk-adjusted rate or to reject the application. As of the 3rd quarter of 2015, more than 12 billion in loans have been issued through Lending Club.

With payday loans, borrowers pay a flat fee of up to $17.50 per $100 to borrow money for a period of 10 to 14 days. Critics argue that the loans can become a predatory lending trap when people borrow more money when they can't pay off the first loan. Industry backers say lenders provide a service to cash-strapped people who have few alternatives.