No, aliens aren't lurking on the International Space Station

Unexplained bacteria have been found on the outer hull of the International Space Station (ISS), according to Russian Anton Shkaplerov. The cosmonaut, who has spent a year in orbit across two missions and is about to embark on a third, says they were found in swabs taken of the station's exterior.

Three crew members from the International Space Station (ISS) have arrived safely back on Earth after a mission of more than five months. A Soyuz capsule carrying Russian Anton Shkaplerov, American Scott Tingle and Japan's Norishige Kanai floated down under a red-and-white parachute for a landing on the steppes of Kazakhstan. Footage from the Russian space agency Roscosmos showed recovery helicopters circling as the capsule touched down at 18:39 local time (12:39 GMT) on Sunday, sending up a cloud of dust. Anton Shkaplerov, who was the first to be lifted and carried from the capsule, told the camera crew: "We are a bit tired but happy with what we have accomplished and happy to be back on Earth. We are glad the weather is sunny."

Scientists studying bacteria found on International Space Station to find out where it came from, says cosmonaut

Bacteria found on the outside of the International Space station could be alien life, according to a cosmonaut who has visited the satellite. 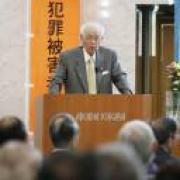 ZHEZKAZGAN, KAZAKHSTAN – Three crew members of the International Space Station returned to Earth on Sunday after completing a 5½-month mission, the U.S. National Aeronautics and Space Administration said. A Soyuz spacecraft carrying Russian cosmonaut Anton Shkaplerov, Norishige Kanai of Japan and Scott Tingle of NASA landed in the Kazakhstan countryside around 6:40 p.m., 3½ hours after detaching from the station. The three had been on the orbital laboratory since mid-December, with Shkaplerov, 46, serving as mission commander from February until he turned over command to American Drew Feustel on Saturday. Kanai, a 41-year-old former Maritime Self-Defense Force doctor, drew international attention for claiming on Twitter to have grown 9 cm taller after three weeks at the space station due to the absence of gravity. He later said he had made a measurement mistake and it had only grown 2 cm.

It will be a glorious day when we finally get definitive proof of alien life. It's going to be absolutely amazing, whether we make contact with a species that rivals or exceeds us in intelligence or we accidentally squish an alien bug on a spaceship window.