If you want to see the future of your city, take a look at these 3 places 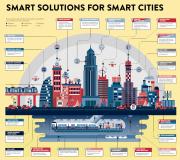 Companies in the world have been competing to develop the first flying car or vertical take-off and landing (VTOL) vehicles. Uber Technologies Inc [UBER.UL] announced its plan to deploy its flying taxi service by 2020 in Dallas-Fort Worth, Texas, and Dubai. Airbus Group is also working on developing its flying car under its division called Urban Air Mobility.

Uber's flying taxi service was supposed to debut in Dallas, Los Angeles and Dubai, but its deal with the emirate fizzled out before tests could even begin. It still wants to trial UberAir outside the country, though, so it launched a search for a third test city in May. Now, the company has announced that it has narrowed down its choices for the third spot to five countries: Australia, Brazil, France, India and Japan. In particular, Uber seems to be considering Sydney or Melbourne, Rio de Janeiro or the state of São Paulo, Paris, Mumbai, Delhi or Bangalore, and Tokyo. On its website, Uber said that a good launch city has a population of over 2 million with a density of over 2,000 people per square mile, because those are the places that would benefit from an air taxi network the most.