Will AI and Robotics Destroy Society? An Eccentric Life 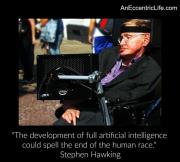 Many bright minds, like Stephen Hawking, believe that the development and use of advanced artificial intelligence could lead to the end of humanity. There have been books written theorizing about the potential dangers of AI like, "SuperIntelligence: Paths, Dangers, and Stategies", by Nick Bostrom, which is a fascinating and dense read that most people probably won't be able to get through. Like most topics in life, there are two directly opposing sides of belief surrounding a heated topic, and artificial intelligence is no different. There are very successful and smart people like Ray Kurzweil, who have written multiple books on the subject, and who are in strong support of artificial intelligence and other new technology. Some may even call Ray Kurzweil's belief in AI a little extreme, and many people have criticized his beliefs and theories in the past, but discussing his critics isn't the point of this article.

Robots Are Developing Feelings. Will They Ever Become "People"?

When writing the screenplay for 1968's 2001, Arthur C. Clarke and Stanley Kubrick were confident that something resembling the sentient, humanlike HAL 9000 computer would be possible by the film's namesake year. That's because the leading AI experts of the time were equally confident. Clarke and Kubrick took the scientific community's predictions to their logical conclusion, that an AI could have not only human charm but human frailty as well: HAL goes mad and starts offing the crew. But HAL was put in an impossible situation, forced to hide critical information from its (his?) coworkers and ordered to complete the mission to Jupiter no matter what. "I'm afraid, Dave," says the robot as it's being dismantled by the surviving astronaut.

Toyota revealed more details about its ambitious AI and robotics effort yesterday at CES in Las Vegas. Dr. Gill Pratt, who leads the effort as CEO of the newly formed Toyota Research Institute (TRI), announced an impressive line-up of engineers and executives to head its technical leadership team and advisory board. Among the hires is James Kuffner, who until recently led Google's robotics program and will focus on cloud computing at TRI. The advisers include notable technologists like Rodney Brooks from Rethink Robotics and Marc Benioff from Salesforce. Late last year, Toyota unveiled a US 1 billion program to advance AI and robotics, hoping to make cars safer and smarter, and also develop useful, reliable home robots to assist people.

Autonomous AI: New robots will learn as children do & set own goals

Samsung Galaxy S8 May Have Dedicated AI Button: Enough To Appeal To Consumers After ... Can this new wearable provide insight into epilepsy? Apache Spark Survey Reveals Increased Growth in Users and New Workloads Including ... Stay up-to-date on the topics you care about. We'll send you an email alert whenever a news article matches your alert term. It's free, and you can add new alerts at any time. We won't share your personal information with anyone.

How AI-powered robots will protect the networked soldier - TechRepublic

The safety of troops in the very near future will rely on Artificial Intelligence-assisted tablets and small screens, networked to drones in the air that feed data back down to ground personnel equipped with information-rich HUD visors. "Robots are going to help humans in dangerous situations contain and control a region," said Dave Bossert, DARPA Program Manager and Senior Engineering Fellow at Raytheon. "Maintaining advantage, communicating, and understanding an area is as good as or better than being aggressive." In a recent interview Deputy Defense Secretary Bob Work expanded on the idea of how AI will power robots in hazardous situations. The networked soldier, Bossert said, will rely heavily on custom-built Android tablets and several wearable devices.