There is "some link" between falling police numbers and a rise in violent crime, Metropolitan Police chief Cressida Dick has said. The commissioner was speaking a day after Prime Minister Theresa May said there was "no direct correlation". It comes after two 17-year-olds were killed in separate stabbings in London and Greater Manchester at the weekend. Ms Dick told LBC Radio the deaths show "how big of a challenge this is" and that it is not a London-only issue. Jodie Chesney was killed in an east-London park as she played music with friends, while Yousef Ghaleb Makkie was stabbed to death in the village of Hale Barns, near Altrincham. 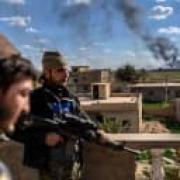 LONDON - Two teenagers were killed in knife attacks in Britain over the weekend, bringing the number of people killed in stabbings this year to at least 24 and pushing the bloodshed to the forefront of national concern. British Interior Minister Sajid Javid said he would be meeting police chiefs this week to find ways to tackle the problem as he called for an end to the "senseless violence. "There is no hiding from this issue … serious violence is on the rise, communities are being torn apart and families are losing their children," Javid said in parliament. Police say the surge in knife crime in a country where guns are hard to obtain has been driven by several factors, including rivalries between drug gangs, cuts to youth services and provocations on social media. Many have occurred in poor pockets of London. The issue has shot to the top of the political agenda after figures show the number of deaths from stabbings reached a record last year. The number of children in England aged 16 and under being stabbed rose by 93 percent between 2016 and 2018. At the same time, police have suffered big cuts in staffing and funding under austerity measures imposed by Prime Minister Theresa May's government, particularly during her tenure as interior minister in the years before she took the top job. In the latest deaths, 17-year-old schoolboy Yousef Ghaleb Makki was stabbed in a village near Manchester while he was visiting a friend. Two boys, also aged 17, have been arrested on suspicion of murder. Jodie Chesney, a 17-year-old Girl Scout, was killed in a knife attack in a park in east London. Her family have called her murder a "totally random and unprovoked attack.

The government has agreed to give an extra £100m to the police to help them tackle a knife crime "epidemic" in England and Wales. The money will mainly go to the seven forces where violence is highest. But the fund falls short of the £200m to £300m requested by police chiefs through the National Police Chiefs' Council (NPCC) last week. Chancellor Philip Hammond initially said police forces must use their existing budgets to tackle knife crime. The NPCC welcomed the new money, which was announced in the chancellor's Spring Statement, saying it would increase the number of officers patrolling crime hotspots, increase the use of stop and search and disrupt criminal gangs.

Prime Minister Theresa May has not listened to police concerns about knife crime, a former head of the Metropolitan Police has said. Mrs May said the deaths of young people were "appalling" as she announced an upcoming summit on knife crime. But Lord Stevens told the BBC: "I don't think she listens, quite frankly, to what she's being told." Labour leader Jeremy Corbyn said Mrs May was not doing enough to tackle the root causes of knife crime. Earlier, Sajid Javid called for knife crime to be treated "like a disease", and said "we have to listen to them [police] when they talk about resources".

Reality Check: Is crime up or down?

Whether crime is rising or falling is hugely important.