Vizio is making some bold moves with its latest smart TVs, but the changes aren't all great for cord cutters. Replacing the traditional remote control with Google Cast and a dedicated Android tablet is a wonderful idea, but Vizio is also boasting that its SmartCast 4K TVs will be "Tuner-Free." That means they won't have ATSC tuners onboard and therefore won't be able to receive over-the-air (OTA) digital broadcasts from major networks such as ABC, CBS, Fox, NBC, and PBS. If you want to access the free (well, ad-supported) content available from those sources, you'll need to buy an outboard tuner--along with the antenna you'd need anyway--and connect the tuner to one of the TV's HDMI inputs. The changes will apply to all of Vizio's 4K Ultra HD TVs with SmartCast, including the new P-Series and upcoming E- and M-Series sets. 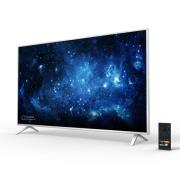 If you're looking for entry into the wonderful world of HDR (High Dynamic Range), you're not going to find a cheaper ticket than the Vizio P-Series displays. Prices start at only 1000 for the 60Hz, 50-inch model, and they're definitely worth a look-see: Dolby Vision HDR viewed on the 2000 (available at Best Buy), 65-inch class P65-C1 reviewed here is a vastly superior experience compared to the average LED/LCD TV with standard dynamic range (SDR); i.e., everything else out there. Vizio's P-Series display with its six-inch Android tablet that serves as the remote and the smarts. Also, because Vizio is positioning the P-Series as part of its SmartCast Internet of Things/smart-home entertainment ecosystem (which is based on Google Cast), the company made some--shall we say--interesting design decisions. Vizio's most interesting decision was to make the P-Series entertainment displays, not smart TVs.

For years, my living room TV has held its place at the top of my home's video food chain. It's an old 60-inch plasma HDTV with a thick black frame that can't help but take over the room's decor. Other TVs come in and out of the house, but the plasma has never lost its spot as the most popular big screen around. My office has become the top draw in the house, and that's thanks to the new 55-inch Vizio P Series. The P Series stands for Performance in Vizio's mind.

"We're all about being disruptive," said Vizio product manager Carlos Angulo at the manufacturer's 2018 product introductions in New York this week. And clearly, Vizio is on its game again with new 4K smart TV lines boasting higher specs at razor-sharp (i.e., low) profit margins. For starters, all four of its smart TV collections (D-, E-, M-, and P-series) now support a multiplicity of HDR signal coding formats that crank up picture color and contrast: Not just with the 4K-mandated HDR-10 standard, but also the more aggressive (frame-by-frame image-adjusting) Dolby Vision format as well as the new-kid-on-the block HLG (Hybrid Log Gamma). Still in the test phase in the U.S., Angulo said HLG is the most efficiently coded and the only format for expanding picture range "that's suitable for on-the-fly live sports events." Angulo said those are the reasons "why cable and satellite TV services are getting behind it."

The real star of Vizio's 2018 TV lineup is value

If you're in the market for a 4K TV this year, Vizio's latest lineup is filled with several compelling options. In fact, the only issue is that it might be tough to figure out which model is best for you. First, there's the new P-series Quantum, which is Vizio's brightest and most feature-packed TV ever. But the rest of the company's P- and M-series sets are also cheaper and better equipped than before. An abundance of choices is ultimately a good thing for shoppers, of course -- just be prepared to do your homework.