JERUSALEM – Israel has completed successful tests of an advanced version of its David's Sling intermediate missile interceptor system that it is developing jointly with the United States, the Defense Ministry said on Wednesday. The system is designed to shoot down rockets with ranges of 100 to 200 km (63 to 125 miles) such as those in the arsenal of Iranian-backed Hezbollah, a Lebanese group that last fought a war with Israel in 2006, or aircraft or low-flying cruise missiles. An initial version of David's Sling completed testing in December 2015 and has been handed over to the Israeli air force but it has not yet been declared operational, a ministry official said. The system is being developed and manufactured jointly by Israel's state-owned Rafael Advanced Defense Systems Ltd. and Raytheon Co., a top U.S. arms maker. The advanced testing announced on Wednesday included the interception of air-launched incoming test target missiles high over the Mediterranean, Moshe Patel of the Israel Missile Defense Organization said in a telephone briefing.

Israel's defense ministry reported Tuesday that it has successfully tested for the first time a wide range of sea-based aerial defense systems. The tests took place in the past few weeks, with targets fired from sea-borne launchers, imitating various range missiles and drones. All were intercepted successfully by Israel's multi-tier defense systems – Iron dome, Arrow, and David's Sling, at times simultaneously. Head of the Israel Missile Defense Organization in the Ministry of Defense, Moshe Patel said "through these tests, we demonstrated that the State of Israel has a robust, multilayered capability to face various threats – cruise missiles, UAVs [Unmanned Aerial Vehicles] and ballistic threats". The tests were led by Rafael Advanced Systems from a testing site in central Israel, with the Israel Air Force and Navy's participation. 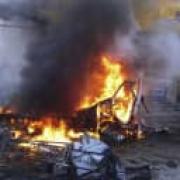 JERUSALEM - Israel said Tuesday that it has successfully tested the country's advanced missile defense system capable of defending against long-range ballistic missile threats. Israeli Prime Minister Benjamin Netanyahu toured an Israeli aerospace facility following the test and leveled a thinly veiled warning at Iran, just days after Israel struck Iranian military targets in neighboring Syria. "Our enemies who seek to destroy us should know that Israel's clenched fist will reach all those who wish ill upon us and we will settle accounts with them," Netanyahu said. The Defense Ministry said the successful test of the Arrow-3 interceptor is "a major milestone" in Israel's ability to defend itself "against current and future threats in the region." It comes a couple of days after Israel thwarted an Iranian missile attack.

The Israeli Defense Ministry successfully completed a joint trial series of tests Wednesday of the newest version of David's Sling anti-ballistic missile system, officials announced. The trial was led by Israel's state-owned Rafael Advanced Defense Systems in central Israel. David's Sling is an Israel Defense Forces military system built to intercept short and medium-ranged tactical ballistic missiles. The system, previously known as Magic Wand, was jointly developed by the Israel Missile Defense Organization and the U.S. Defense Department's Missile Defense Agency. "This test campaign is a critical step in ensuring Israel has the capability to defend itself from a very real and growing threat.

BISLACH AIR BASE, ISRAEL – Israel and the U.S. inaugurated the first American military base on Israeli soil on Monday, which will serve dozens of soldiers operating a missile defense system. The move comes at a time of growing Israeli concerns about archenemy Iran's development of long-range missiles. Together with the U.S., Israel has developed a multilayered system of defenses against everything from long-range guided missile attacks from Iran to crude rockets fired from Lebanon and the Gaza Strip. The base's opening is largely symbolic and isn't expected to bring operational changes. But the Israeli military says that along with other measures, it sends a message of readiness to Israel's enemies.