With interest soaring in machine learning and its role in all kinds of games, chess will be in the spotlight at the prestigious MIT Sloan Sports Analytics Conference this year, organizers announced today. The chess program is scheduled for Saturday, March 2. Chess.com's

This Robotic Chessboard Is Like Something Out of Harry Potter 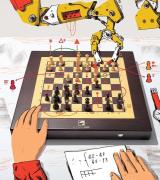 Old-school purists might argue that the pervasiveness of online chess has ruined the game's tactile appeal. Instead of pushing beautifully carved pieces across a painted board, most players nowadays drag and drop computer icons--a mouseclick is the only tangible element. But like something out of "Harry Potter," Square Off uses motors and magnets to glide an opponent's solid pieces over its rosewood surface, restoring an experience many players thought might be lost to technology. I bought two boards and shipped one to Danny. Paired to our smartphones via Bluetooth, the boards speak to one another over the internet.

And maybe the rest of the world did, too.

Chess is an antique, about 1,500 years old, according to most historians. As a result, its evolution seems essentially complete, a hoary game now largely trudging along. That's not to say that there haven't been milestones. In medieval Europe, for example, they made the squares on the board alternate black and white. In the 15th century, the queen got her modern powers.1

A few months after demonstrating its dominance over the game of Go, DeepMind's AlphaZero AI has trounced the world's top-ranked chess engine--and it did so without any prior knowledge of the game and after just four hours of self-training.