What to Play When You're Not Playing Wordle

So, you succumbed to Wordle. The deceptively simple five-letter online word game, which went from a one-person passion project with no players in October to a full-blown web and social-media phenomenon as the new year began, is fun and challenging. It engages parts of the brain previously tapped by Scrabble, Sudoku, and, if we're being honest, good-old Hangman. But its most distinctive feature--arguably the thing that has made it so popular and addictive for many--is also its most frustrating: You can only play one word puzzle a day. What, then, are you supposed to do with the other 23 hours and 55 minutes when you're not guessing five-letter words in rows of black boxes?

I Figured Out Wordle's Secret

Wordle! It's a word game people are playing online. Each day, the game offers one new puzzle: Guess a five-letter English word correctly in six or fewer tries. After each guess, the game tells you which letters are correct, which are wrong, and which are the right letters in the wrong place. Games seem like trifles, and many are, which can make them difficult to take seriously as art or culture. Perhaps that's why accounts of their success tend to focus on their peripheries. Wordle is easy to access, just a website you can visit from any browser or device without a download.

Beyond Wordle: the best word games to try next 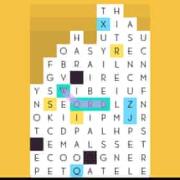 The debate continues to rage among Wordle players: has the New York Times ruined it? Why are there suddenly so many double-letter days (SWILL, seriously?); Or are people just losing interest? Since Wordle caught the world's attention, there has been a fast-flowing stream of copycats and humorous takes on the word-guessing game, based on everything from swearing (Sweardle) to choral music (Byrdle) to geography (Worldle). If you're looking for something different, though, rather than just an inventive twist on the same theme, the Android and Apple app stores have many other word games you can play on your phone. Fans have been quietly enjoying some of these for years – some offer a daily five or 10 minutes of puzzle fun, while others let you sink as much time into them as you want.

What a Perfect Wordle Guessing Strategy Teaches Us About English

We've all been inundated with Wordle's little colored boxes, showing the path to winning (and the less frequently shared path to losing) that a person took on a given day. With the announcement of the "low seven figures" sale to the New York Times, we're sure to see a lot more of it in the coming months and years. As we explore Wordle, we can find out a lot: Software engineer Angie Jones joked that one's strategy could become part of a job application, and of course there's intramarital bragging rights and the opportunity to get out of studying for the SAT. We learn about how we think--and that too much thinking can generate disrespect. It can also generate cushions. Some players are methodical; others enjoy the game best when they're not thinking too hard.

LAGOS--Nigeria is beating the West at its own word game, using a strategy that sounds like Scrabble sacrilege. By relentlessly studying short words, this country of 500 languages has risen to dominate English's top lexical contest. Last November, for the final of Scrabble's 32-round World Championship in Australia, Nigeria's winningest wordsmith, Wellington Jighere, defeated Britain's Lewis Mackay, in a victory that led morning news broadcasts in his homeland half a world away. It was the crowning achievement for a nation that boasts more top-200 Scrabble players than any other country, including the U.K., Nigeria's former colonizer and one of the board game's legacy powers. "In other countries they see it as a game," said Mr. Jighere, now a borderline celebrity and talent scout for one of the world's few government-backed national programs.