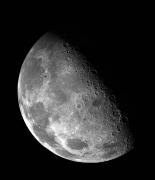 A group of researchers using a new artificial intelligence algorithm have identified about 6,000 previously unseen craters on the moon. The discovery came as part of a Natural Sciences and Engineering Research Council of Canada (NSERC)-funded effort to see and analyze how the tech worked while looking at the location as well as the size of lunar craters. Typically, a task like this requires a lot of manual effort. Observing teams have to photograph the lunar surface, identify craters one by one, and then use the size of the image to determine how big the impact holes actually are. "Tens of thousands of unidentified small craters are on the moon, and it's unrealistic for humans to efficiently characterize them all by eye," University of Toronto's Ari Silburt, who co-developed the tech, said in a statement.

A.I. spots thousands of unidentified craters on the moon

The moon is under constant bombardment by meteorites and asteroids that can leave massive craters on its surface. The Aitken basin, the largest impact crater on the lunar surface, has a diameter equivalent to the distance from London to Athens, Greece. But not all craters are so noticeable -- most are relatively insignificant. Thousands of previously unknown craters have been spotted on the moon thanks to an artificial intelligence program designed by researchers at the University of Toronto. "We created an A.I. powered method that autocratically identifies craters on the surface of the moon, and possibly other bodies," Mohamad Ali-Dib, a postdoctoral fellow in the Centre for Planetary Sciences who worked on the project, told Digital Trends.

Artificial intelligence (AI) has been able to uncover nearly 7,000 new craters carved into the surface of the Moon in a matter of hours. The finding, which was described in a paper on arXiv, was made by a team of researchers led by Ari Silburt at Penn State University and Mohamad Ali-Dib at the University of Toronto. According to the paper, the crater-counting artificial neural network (ANN) program -- the same kind used to train driverless cars -- was trained on a dataset of elevation maps covering two-thirds of the moon. The program was then tested on the remaining third of the moon. The study notes that while the ANN, which was taught to look for craters that were wider than 3 miles, falsely identified a few non-craters, in only a few hours the system become so effective, it not only identified already known billion years old lunar craters but also spotted previously unknown ones.

The moon has hundreds more craters than we thought

A new count of the moon's craters has turned up 33 per cent more than predicted. Bombardment by small meteors is continually churning up the surface of the moon, and the dust-up could pose hazards to future lunar settlements. On Earth, they usually burn up in the atmosphere, or land in uninhabited areas where they go undetected. But, on the moon, they constantly form craters and impact basins. Previous studies of craters and of Apollo samples helped paint a picture of past crater formation, but we've only recently begun to distinguish new craters amid the moon's already-battered surface.

Scientists use AI to find tiny craters on Mars

The High-Resolution Imaging Science Experiment (HiRISE) camera aboard NASA's Mars Reconnaissance Orbiter took this image of a crater cluster on Mars, the first ever to be discovered by artificial intelligence (AI). NASA said, "These craters were created by several pieces of a single meteor. The largest of the craters is about 13 feet (4 meters) wide. In total, the craters span about 100 feet (30 meters) of the red planet's surface. The craters were found in a region called Noctis Fossae, located at latitude -3.213, longitude 259.415."