Bill Barr Injures Back While Trying to Lift Mailbox Into Truck

WASHINGTON (The Borowitz Report)--Attorney General William Barr suffered what was described as a "severe back strain" while trying to lift a mailbox into a pickup truck on Saturday. According to Barr, he tried to give the mailbox "one good yank" to heave it into the truck, when he heard "something go pop" in his back. "I remember thinking, Hoo, boy, that's not good," Barr said. At the White House, Donald J. Trump said that the injury to Barr was "disgraceful" and yet another argument against mail-in voting. "How can we expect the Postal Service to run a fair election when a mailbox almost killed poor Bill Barr?" he asked.

Indeed, that's the message in many areas of Michigan where mailboxes are attached to posts at the end of a driveway. As another winter approaches, road commissions are reminding residents to check the stability of their mailbox. 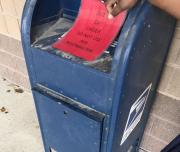 The Massachusetts Secretary of the Commonwealth's Office is investigating whether any ballots were stolen from a United States Postal Service mailbox over the weekend. Bill Galvin's office has reached out to the West Boylston town clerk to see if any voters were affected after a USPS mailbox was broken into between Saturday and Monday. Police said it appears that the majority of the mail from the Wachusett Plaza mailbox -- at 184 West Boylston St. -- was stolen. "If you did use this mailbox between the above dates, there is a good chance that the mail was stolen and will not reach its destination," the West Boylston Police Department said in a statement. As a result, Galvin's office contacted the town clerk to "determine whether any ballots may have been affected and to work with her on making sure voters know about this if they returned their ballots over the weekend in that one mailbox," the Secretary of the Commonwealth's Office said in a statement.

Is your mailbox overflowing with campaign ads? We want to hear from you

Just over a month is left before the November election and California voters are starting to see the proof in their mailboxes, hanging on their doorknobs and each time they turn on a computer or TV. Whether it's Republican San Diego County Rep. Darrell Issa blasting Democratic rival Douglas Applegate as the "perfect candidate" of House Minority Leader Nancy Pelosi or opponents of the Proposition 56 tobacco tax increase tying the ballot measure to "wealthy special interests," we'd like to hear how California political campaigns and outside groups are jockeying for your attention -- and your votes. Have you received a barrage of campaign mailers this election season? Are you bombarded with information about local races and propositions? We want to hear from you.