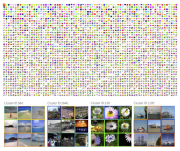 The success of deep learning over the last decade, particularly in computer vision, has depended greatly on large training data sets. Even though progress in this area boosted the performance of many tasks such as object detection, recognition, and segmentation, the main bottleneck for future improvement is more labeled data. Self-supervised learning is among the best alternatives for learning useful representations from the data. In this article, we will briefly review the self-supervised learning methods in the literature and discuss the findings of a recent self-supervised learning paper from ICLR 2020 [14]. We may assume that most learning problems can be tackled by having clean labeling and more data obtained in an unsupervised way.

A Visual Guide to Self-Labelling Images

In the past year, several methods for self-supervised learning of image representations have been proposed. A recent trend in the methods is using Contrastive Learning (SimCLR, PIRL, MoCo) which have given very promising results. However, as we had seen in our survey on self-supervised learning, there exist many other problem formulations for self-supervised learning. Combine clustering and representation learning together to learn both features and labels simultaneously. A paper Self-Labelling(SeLa) presented at ICLR 2020 by Asano et al. of the Visual Geometry Group(VGG), University of Oxford has a new take on this approach and achieved the state of the art results in various benchmarks.

Graph-level representations are critical in various real-world applications, such as predicting the properties of molecules. But in practice, precise graph annotations are generally very expensive and time-consuming. To address this issue, graph contrastive learning constructs instance discrimination task which pulls together positive pairs (augmentation pairs of the same graph) and pushes away negative pairs (augmentation pairs of different graphs) for unsupervised representation learning. However, since for a query, its negatives are uniformly sampled from all graphs, existing methods suffer from the critical sampling bias issue, i.e., the negatives likely having the same semantic structure with the query, leading to performance degradation. To mitigate this sampling bias issue, in this paper, we propose a Prototypical Graph Contrastive Learning (PGCL) approach. Specifically, PGCL models the underlying semantic structure of the graph data via clustering semantically similar graphs into the same group, and simultaneously encourages the clustering consistency for different augmentations of the same graph. Then given a query, it performs negative sampling via drawing the graphs from those clusters that differ from the cluster of query, which ensures the semantic difference between query and its negative samples. Moreover, for a query, PGCL further reweights its negative samples based on the distance between their prototypes (cluster centroids) and the query prototype such that those negatives having moderate prototype distance enjoy relatively large weights. This reweighting strategy is proved to be more effective than uniform sampling. Experimental results on various graph benchmarks testify the advantages of our PGCL over state-of-the-art methods.

Metric learning is a widely used method for few shot learning in which the quality of prototypes plays a key role in the algorithm. In this paper we propose the trainable prototypes for distance measure instead of the artificial ones within the meta-training and task-training framework. Also to avoid the disadvantages that the episodic meta-training brought, we adopt non-episodic meta-training based on self-supervised learning. Overall we solve the few-shot tasks in two phases: meta-training a transferable feature extractor via self-supervised learning and training the prototypes for metric classification. In addition, the simple attention mechanism is used in both meta-training and task-training. Our method achieves state-of-the-art performance in a variety of established few-shot tasks on the standard few-shot visual classification dataset, with about 20% increase compared to the available unsupervised few-shot learning methods.

Real world learning scenarios involve a nonstationary distribution of classes with sequential dependencies among the samples, in contrast to the standard machine learning formulation of drawing samples independently from a fixed, typically uniform distribution. Furthermore, real world interactions demand learning on-the-fly from few or no class labels. In this work, we propose an unsupervised model that simultaneously performs online visual representation learning and few-shot learning of new categories without relying on any class labels. Our model is a prototype-based memory network with a control component that determines when to form a new class prototype. We formulate it as an online Gaussian mixture model, where components are created online with only a single new example, and assignments do not have to be balanced, which permits an approximation to natural imbalanced distributions from uncurated raw data. Learning includes a contrastive loss that encourages different views of the same image to be assigned to the same prototype. The result is a mechanism that forms categorical representations of objects in nonstationary environments. Experiments show that our method can learn from an online stream of visual input data and is significantly better at category recognition compared to state-of-the-art self-supervised learning methods.