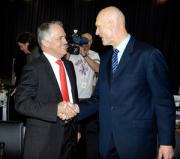 Ten years ago today Malcolm Turnbull was getting stuck in to a debate in Parliament House with Peter Garrett about climate change. Climate change, said Turnbull, was "an enormous challenge and probably the biggest one our country faces, the world faces, at the moment." At the time, Turnbull was the environment minister in John Howard's final term. Now of course, Turnbull is prime minister. Garrett, halfway through his six-year stint as a Labor politician, was Kevin Rudd's shadow environment minister.

In the meantime, Prime Minister Kevin Rudd--from the Labor party--failed to get the votes to pass his carbon legislation through parliament and subsequently was overthrown by a popular deputy prime minister, Julia Gillard, who promised not to introduce carbon legislation. Gillard did in fact introduce carbon pricing in 2011. Cue vitriolic opposition from an invigorated conservative opposition led by Abbott. Gillard's popularity plummeted as opponents attacked her credibility; she was then challenged and defeated by a resurgent Kevin Rudd, in 2013. Abbott took office in a landslide and has proceeded to repeal the carbon legislation, which he called a "toxic tax."

New security and reliability obligations will be imposed on power generators, and ageing plants will have to provide regulators with three years' notice before they close, according to sweeping reforms proposed by Australia's chief scientist. In a briefing for state energy ministers on Thursday afternoon, ahead of the release of his final report to the Council of Australian Governments on Friday, Alan Finkel outlined the new regulatory regime and signalled he would recommend a new emissions reduction mechanism, to be called the clean energy target. According to sources familiar with the final review, Finkel will propose that new generators be subject to specific security and reliability obligations to ensure renewable energy players can guarantee dispatchable generation around the clock, either through battery storage or by contracting back-up thermal power. The new requirements will impose costs on the renewable energy sector. There will also be new, system-wide obligations across the national electricity market to ensure faster responses during natural disasters.

At least for once, don't let politicking kill off a workable energy policy Katharine Murphy

Just for a moment, we are going to wind the clock back to 2009. Confronted by repeated requests from Kevin Rudd's office to go hard against the then opposition leader Malcolm Turnbull over climate change, the then junior climate change minister Greg Combet asked a sensible question.

If you've watched the inglorious spectacle of the failure of Australian politics on climate and energy policy over the last 10 years, it's a bit hard to look out on the wreckage without feeling sick to the stomach. But look we must and, if we look now, we are able to chart the consequences of abject failure in highly specific ways. What Australians are experiencing now – rising prices, rising emissions and a grid that creaks and sputters in extreme weather – is the logical consequence of a decade of unconscionable public policy failure. This isn't some freak accident that's been visited on the country, we are not the unwitting victims of a natural disaster that has blown in unexpectedly. We are reaping now precisely what has been sown.