How Much in Taxes do People Pay for their Wages? 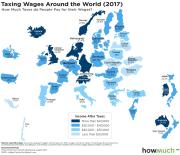 High taxes may not be such a bad thing. As shown by the latest figures on wage taxation released by the OECD, countries with high taxes also tend to have high net incomes.

Men more likely to 'marry up'

"As the number of highly educated women has increased in recent decades, the chances of'marrying up' have increased significantly for men and decreased for women," the study reports. To gather their results, the researchers examined gender-specific changes in financial return on education among people 35-44 years old. The study used U.S. census data from 1990 and 2000 and the 2009-2011 American Community Survey. The study found that women's personal earnings have grown faster than men's earnings, and that women are becoming more educated than men. These "combined facts that husbands are less educated than their wives than before, and the return on earnings for men has stagnated, a husband's contribution to family income has decreased.

Preliminary poll projections released Sunday indicate Swiss voters have rejected a plan to create a basic monthly income for all citizens, local media reported. The question was put to a public vote after several advocacy groups helped garner the more than 100,000 signatures necessary to trigger a referendum. There is little political or popular support of the idea for basic monthly income, however, according to preliminary projections from GFS for Swiss television. Around 78 percent of Swiss voters rejected the proposal that would have created monthly income for all people regardless of their employment status. The proposed amount would have been 2,500 Swiss francs, or approximately 2,555 for an adult per month and was in response to the high cost of living in Switzerland.

BRANDENBURG, GERMANY – German Chancellor Angela Merkel and Prime Minister Shinzo Abe on Wednesday disagreed on how best to kick-start the global economy ahead of a Group of Seven (G-7) summit in Mie Prefecture later this month. While Abe made a characteristic pitch for large-scale stimulus spending, Merkel suggested Germany is already doing enough, pointing to the extra economic activity brought on by the arrival of 1 million refugees and migrants last year. The leaders of the major European and East Asian export powers will outline their competing visions when Japan later this month hosts a meeting of the G-7 advanced industrial countries -- also including Britain, Canada, France, Italy and the United States. Abe -- known for his "Abenomics" attempts to stimulate economic growth through increased public spending -- has been rallying G-7 member nations to make a pitch for jointly providing a boost to the global economy. "We spoke about the global economic situation and that we cannot just wait for normal economic cycles but have to proactively tackle the risks to rejuvenate the world economy," he said.

Amazon stores won't need cashiers. It's a new economy where many human jobs vanish. And some say the solution may be a universal basic income. On Thursday, the Economic Security Project, a research alliance of technologists and activists, announced a $10 million fund to study universal basic income over the next two years, Quartz reported. SEE ALSO: Amazon's grocery store disruption has a very human problem Universal basic income provides every citizen with a standard set of money no matter their employment status.