Google's main smartphone product family has been its Pixel series, but the company's latest mobile project will now have another release available. The ZenFone AR, an Android-powered smartphone that features Google's Tango augmented reality system, is now available from retailers. At retail, the phone's 6GB RAM/64GB version costs $599, while a higher-end 8GB RAM/128GB version will run for $699. An unlocked version is available on Amazon that'll work on major carriers and Verizon also sells its own exclusive version. Notably, the ZenFone will be the second phone that's built with hardware to run Google's Tango augmented reality platform. 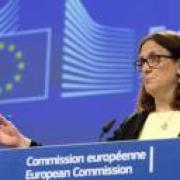 SAN FRANCISCO – Apple Inc. will in the coming week debut tools to let two iPhone users share augmented reality while limiting the personal data sent to its servers, two people familiar with the matter said. Augmented reality (AR) allows viewers to see virtual structures superimposed on their surroundings via their smartphones or other devices. It is the technology used in mobile game Pokemon Go, and by industry, such as factories seeking to map new assembly lines. Apple and rival Google are racing to release AR tools to attract software developers to their platforms. Both are seeking to allow two people to share data so they can see the same virtual object in the same space via their individual devices.

When Ralph Bishop opened a text on his iPhone, he didn't discover an ordinary photo or video message. Bishop was able to see the trail as his iPhone's camera viewfinder surveyed the area. He followed the secret pathway to the other side of the room, just beyond the staircase, where a message that read "Good luck!" awaited him. Bishop, head of design at GIPHY, was demonstrating how the popular picture-sharing platform's new app works. The app, called GIPHY World, will use Apple's ARKit platform to make GIFs (a popular format for online images) appear in the real world when viewed through the phone's camera.

Apple files patent for WHAT?

As Apple looks to its next big product, the company is increasingly placing bets on augmented reality, a revolutionary technology that combines the digital and physical worlds and appears poised to drastically change the way we experience everyday life. Apple has filed a patent for an intriguing glasses-style device that harnesses augmented reality (AR), showing how the technology could work with a device and overlay information on real world objects. In this case, the technology could be used in conjunction with a smartphone, but also with "semi-transparent spectacle or glasses" or both devices in tandem with each other. For example, the technology could show something as simple as the year a building was built, or its architectural design. Or it could be much more involved, potentially overlaying video and statistics on a car's dashboard.

The maker of Pokemon Go has revealed it is working on a Harry Potter-themed follow-up that will also include augmented reality features. Niantic said players would find and fight fantasy beasts in real-world neighbourhoods in the smartphone game, which has yet to get a release date. Pokemon Go reportedly had about 45 million daily players at its peak and generated more than $1.2bn (£915m) in sales. One expert said the Harry Potter brand had the potential for similar success. Warner said Niantic's Harry Potter: Wizards Unite was just one of several new games based on JK Rowling's characters that are planned.