Japanese startup ispace Inc. will deliver a lunar rover under development by the United Arab Emirates to the Moon next year in what will be the Arab world's first lunar mission. Under the contract recently announced by the Tokyo-based space company and the Mohammed Bin Rashid Space Centre, Dubai's governmental space agency, ispace will also provide communications and power during the journey to the moon and on its surface. The UAE's rover will be loaded onto a lunar lander that ispace plans to launch from Florida in the United States using a rocket made by SpaceX, officially known as Space Exploration Technologies Corp. and founded by tech billionaire Elon Musk. The Rashid rover, weighing 10 kilograms and measuring about 50 centimeters in length and width and 70 cm in height, will be transported in ispace's lander currently under development. The project will mark ispace's first space mission since its establishment in 2010. 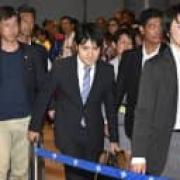 WASHINGTON – NASA announced Friday nine U.S. space companies chosen to bid on delivery services to the moon, including Draper Laboratory Inc., whose team includes Japanese lunar exploration startup ispace Inc. NASA is soliciting proposals to deliver science and technology payloads, such as small rovers and instruments, to the lunar surface for eventual human exploration of the moon. The Commercial Lunar Payload Services contracts to be awarded by NASA have a combined maximum value of $2.6 billion during the next 10 years. Lunar payloads could fly on these contracted missions as early as 2019, the space agency said. The nine companies include Lockheed Martin Corp., Deep Space Systems Inc. and Moon Express Inc.

You could see adverts beamed onto the moon as early as 2020. 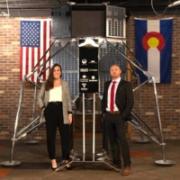 Japanese lunar exploration startup Ispace Inc. says it will set up a lunar lander development site in the United States by the end of the year in a bid to deliver payloads, including research equipment, to the moon in support of future NASA missions. The Tokyo firm seeks to bolster its capability to develop the spacecraft by hiring engineers based in the state of Colorado, which boasts one of the nation's most well-established aerospace economies, to support NASA's Commercial Lunar Payload Services (CLPS) program. The program aims to engage the private sector in facilitating deliveries to the Moon, setting the stage for astronauts to land on the lunar surface in 2024. It is part of the Artemis Accords, a U.S.-led agreement which seeks to establish a set of principles for space exploration, including lunar resource extraction. Japan has joined the framework, as have eight other countries as of this month.

A Tokyo-based startup company called Ispace has raised eyebrows by raising $90 million (10.2 billion yen) from some of the country's biggest businesses, including Japan Airlines Co. and television network Tokyo Broadcasting System Holdings Inc. The funds, they say, will be used to send a spacecraft into lunar orbit by 2019, and then land a year later after orbiting the Moon.