The University of Chicago is launching the Center for Data and Applied Computing, a research center for developing new methods in computation and data analytics and applying them to ambitious projects across the full spectrum of science and scholarship. The Center for Data and Applied Computing, which opens this summer, will provide computationally focused, interdisciplinary projects at UChicago with resources, space and a network for collaboration on campus and around the world. The center will award seed funding to a select group of projects, house and provide administrative support to core projects with external funding, and organize workshops, talks and other gatherings that generate fresh ideas from UChicago faculty, researchers and students. "Building capacity for computation-based projects is essential to advance research, education and the impact of scholarly work in a wide range of fields," said President Robert J. Zimmer. "Collaborative efforts using data science, artificial intelligence and other computing approaches are rapidly creating dramatic new opportunities for academic work as well as new entrepreneurial opportunities.

Artificial Intelligence researchers have long sought to understand and replicate processes of scientific discovery. This article discusses Discovery Informatics as an emerging area of research that builds on that tradition and applies principles of intelligent computing and information systems to understand, automate, improve, and innovate processes of scientific discovery.

It has been a great year for scientists associated with the Laser Interferometer Gravitational-Wave Observatory (LIGO). In February, and then again in June, researchers at LIGO -- which consists of two detectors, one each in Hanford, Washington, and Livingston, Louisiana -- announced that they had discovered gravitational waves created by two black holes colliding 1.3 billion light-years from Earth. Since then, the LIGO collaboration has earned several accolades, including a $3 million award given to its researchers by the Breakthrough Prize Foundation, the journal Nature naming LIGO spokeswoman Gabriela Gonzalez to its list of "10 people who mattered this year," and the magazine Physics World -- published by the London-based Institute of Physics -- naming the gravitational wave discovery the "Breakthrough of the Year." Now, the significance of the discovery has been acknowledged once again -- this time by the journal Science, which also named the discovery the "Breakthrough of the Year." "The achievement fulfilled a 100-year-old prediction, opened up a potential new branch of astronomy, and was a stunning technological accomplishment," the journal said in a statement. 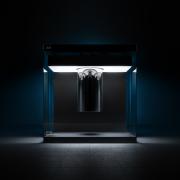 Sifting effectively through this vast chemical space would allow us to rapidly find a specific molecule and create a new material with the properties we want. This could unlock endless possibilities of material design – for life-saving drugs, better batteries, more advanced prosthetic limbs or faster and safer cars, advancing healthcare, manufacturing, defense, biotechnology, communications and nearly every other industry. This design ability would replace our centuries-old reliance on serendipity in material discovery – something we've been through with plastics, Teflon, Velcro, Vaseline, vulcanized rubber and so many other breakthroughs. Even graphene – the atom-thick layer of carbon and the thinnest, strongest material known – was discovered by (informed) chance, when physicist Kostya Novoselov found discarded Scotch tape in his lab's waste basket.

Distortions in the fabric of space-time, which were predicted by Albert Einstein a century ago, have been directly detected for the second time. Approximately 1.4 billion light-years from Earth, two black holes spiraled around each other and collided, creating ripples in the fabric of space-time. These ripples, known as gravitational waves, arrived at Earth in December 2015, and were detected by the Laser Interferometer Gravitational Wave Observatory (LIGO). The LIGO collaboration announced the finding on Wednesday during a news conference at the 228th meeting of the American Astronomical Society (AAS) in San Diego. The gravitational wave signal -- officially known as GW151226 -- was detected by LIGO on Dec. 25, 2015, at 11: 38 p.m. EDT (0338 a.m.