MIT CSAIL's flexible sensors can be applied as skin to the bodies of soft robots. When you picture a robot, you likely envision one large and rigid, with limited movement and an outer shell that is hard to the touch. Several projects currently underway seek to change that, with the use of soft, more human-like artificial skin. Artificial skins include any surface-based device or distributed network of sensors that enable an agent to perceive mechanical deformations, touch, temperature, vibration, and/or pain, according to Ryan Truby, a post-doctoral fellow in the Massachusetts Institute of Technology (MIT) Computer Science & Artificial Intelligence Lab (CSAIL). Engineers are working to create skins that include as many of these sensations as possible, while also possessing high sensitivity and spatial resolution in sensing, he adds.

Most conventional androids are fairly rigid, susceptible to damage and difficult to repair. However, scientists are determined to (literally) give them thicker skins. They've experimented with soft, deformable circuits that are flexible, and could reduce business expenses in the long term -- but are still prone to tearing and puncturing. The solution to these issues may lie in one recent advancement. A group of researchers from Carnegie Mellon University have found a way to counter surface damage and electrical failure commonly observed in soft materials used in engineering robotic electronics.

Self-healing material could be a breakthrough for humanoid robots 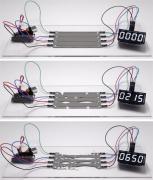 Researchers at US university Carnegie Mellon have created a new electrically conductive material that can repair itself, presenting new opportunities for soft robotics and wearable technology. Combining properties of metal and plastic, the supple, stretchy material can be used to make circuits that stay operational even after sustaining physical damage. The discovery opens up the possibility that robots may one day have sensor-laden skin that can repair itself like a human's, or that we could sport ultra-thin wearable devices on our bodies for long periods of time without them degrading. "This could have important applications in areas like wearable computing, where you want circuits you can incorporate into textiles or place on your skin, and just like natural skin if you get bruised or cut, your skin is able to repair itself," says Carmel Majidi, an associate professor of mechanical engineering, in a video produced by Carnegie Mellon University (CMU). "Our material also has this property."

New soft robotic skin automatically heals itself, even if you shoot it full of holes 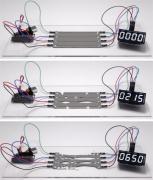 If there's one thing that scientists absolutely should be working on, it's a self-regenerating robo-Deadpool or the eerily-fluid T-1000 Terminator. Thankfully, a team of scientists just took an important first step towards building a robot that can keep on truckin' even with a couple of bullet holes improve its ventilation. Okay, so maybe they weren't working on killer robots and (probably) didn't subject their research to gunfire, but what they did do is create a soft, flexible electronic material that can automatically repair its circuits when it gets damaged. The new "skin" is made of droplets of liquid metal housed within a rubber-like material that can bend, fold, and stretch. Calling it "self-repairing" is a bit of a misnomer, as the stretchy material won't stitch itself together.

Robots that can disable bombs, perform delicate surgery or nimbly handle cooking ingredients could be just around the corner, thanks to a new wonder material.