[Interview] How AI, robotics and digital technologies are transforming healthcare

New Delhi: Advances in technology and medical research could mean seismic changes in the healthcare industry. Soon, cancer, heart disease, diabetes and other debilitating illnesses could be defeated - perhaps, 20 years from now (unbelievable as it may sound) - thanks to scientists, medical doctors and researchers who are working vigorously, making stupendous progress on all these fronts. Over the last decade, healthcare is one of the industries that has evolved the most, yet, we're going to see changes in the way diseases are being treated. It's evident that we're going to witness drastic changes in a number of dimensions - from robots in the role of healthcare professionals to smart technology and artificial intelligence tools that will improve the quality of care and population health. Dr Sanjay Pandey, Head - Andrology and Reconstructive Urology - Kokilaben Dhirubhai Ambani Hospital, Mumbai, spoke on how digital technology, robotics and AI are transforming the face of medicine.

The aim is clear: To help the community digitally record information to cut costs and increase yields -- with just a smartphone in their hands as AI leveraged Cloud computing to make sense of the data for farmers. India has now embarked on a journey to bring AI sensors into the fields. For Anant Maheshwari, the company's India President, Microsoft has begun empowering small-holder farmers in India to increase their income through higher crop yield and greater price control. "We are working with farmers, state governments, the Ministry of Electronics and Information Technology (MeitY) and the Ministry of Agriculture and Farmers Welfare to create an ecosystem for AI into farming," Maheshwari told IANS. In some villages in Telangana, Maharashtra and Madhya Pradesh, farmers are receiving automated voice calls that tell them whether their cotton crops are at risk of a pest attack, based on weather conditions and crop stage.

News from a postpandemic world 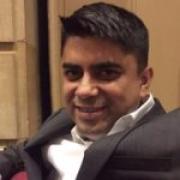 No one knows who gave Rahul Roy tuberculosis. Roy's charmed life as a successful trader involved traveling in his Mercedes C class between his apartment on the plush Nepean Sea Road in South Mumbai and offices in Bombay Stock Exchange. He cared little for Mumbai's weather. He seldom rolled down his car windows – his ambient atmosphere, optimized for his comfort, rarely changed. Historically TB, or "consumption" as it was known, was a Bohemian malady; the chronic suffering produced a rhapsody which produced fine art. TB was fashionable in Victorian Britain, in part, because consumption, like aristocracy, was thought to be hereditary. Even after Robert Koch discovered that the cause of TB was a rod-shaped bacterium – Mycobacterium Tuberculosis (MTB), TB had a special status denied to its immoral peer, Syphilis, and unaesthetic cousin, leprosy. TB became egalitarian in the early twentieth century but retained an aristocratic noblesse oblige. George Orwell may have contracted TB when he voluntarily lived with miners in crowded squalor to understand poverty. Unlike Orwell, Roy had no pretentions of solidarity with poor people. For Roy, there was nothing heroic about getting TB. He was embarrassed not because of TB's infectivity; TB sanitariums are a thing of the past. TB signaled social class decline. He believed rickshawallahs, not traders, got TB.

If you're a Bengaluru resident, it's quite likely that you might have seen mfine's billboards, which are plastered around town, pitching their solution for an on-demand healthcare platform, where you can get a doctor consultation in 60 seconds. The year-old startup, founded by ex-Myntra co-founder Ashutosh Lawania and other members of Myntra's leadership team is not only mobile first, it's also an AI first startup. Its homepage touts its AI healthcare platform, claiming that the system is learning medical standards, protocols, diagnosis and treatment methods. "Software is going to eat the world, but AI is going to eat software." AI and machine learning have made significant incursions into agriculture, transport, education, and healthcare this decade, and some of these ripples can be felt in India too.