Here's our first look at the 'Obi-Wan Kenobi' series

Here's one thing we know for sure about Obi-Wan Kenobi: we'll finally see another showdown with Darth Vader. We got our first glimpse at the series during Disney Day, the streaming network's extended birthday celebration. While there's no actual footage from Obi-Wan available, a behind-the-scenes clip streaming through the app and concept art reveals some familiar and new territory for the franchise. Ewan McGregor confirms the show will start off with Obi-Wan trying to keep Luke Skywalker safe -- as you'd expect -- but that's just the launching point for a whole series of new adventures, according to director Deborah Chow. Disney previously revealed that Hayden Christensen would be returning to play Darth Vader, and judging from the concept art (and some training footage), he'll definitely be ready to throw down once again.

Animated series featuring the lead characters from Moana and The Princess and the Frog are headed to Disney, as is the first long-form TV series from Pixar. All three shows are slated to premiere in 2023. Disney announced the projects, among a host of others -- including a Baymax series based on the Big Hero 6 character and a sci-fi show set in Lagos, Nigeria, from African entertainment company Kugali -- at its investor day presentation Thursday. Both Moana and Tiana will feature original music as the two lead characters continue to explore their respective worlds of the South Pacific and New Orleans. Pixar's first long-form series is called Win or Lose and comes from Carrie Hobson and Michael Yates, story artists on Toy Story 4. The show will center on a co-ed middle school softball team in the week leading up to a championship game, with each episode told from the perspective of a different member of the team.

Sundance Film Festival isn't happening this year -- not in person, anyway -- so creators are finding new ways to showcase their creations. The folks at Disney, for instance, are offering an interactive short through NVIDIA's GeForce Now, a streaming service that's usually focused on blockbuster games. Any user can search for Baymax Dreams of Fred's Glitch and experience the charming but all-too-brief adventure, which focuses on the cast from Big Hero 6. As you might have guessed, Baymax is suffering from an adorable but destructive'glitch' creature. With a little help from Fred, it's your job to contain the threat and and repair Baymax's programming.

Is Baymax a Possibility? PointClear Solutions 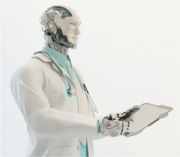 When Disney released the film "Big Hero 6" in 2014, audiences immediately fell in love with Baymax, the "personal healthcare companion." Designed for no other purpose than to improve healthcare, Baymax not only appeared as non-threatening and approachable as possible (he's described as a "giant marshmallow"), but was also programmed to respond to sounds of human distress and provide care for that distress, whether it be a recommendation for more sleep, a bandage, or something more advanced. While the plot of "Big Hero 6" took Baymax to superhero levels by giving him a rocket fist and the ability to fly, the idea of artificial intelligence (and even robots) making their way into healthcare isn't quite as farfetched. In fact, in many ways, Disney and Baymax provided a glimpse into the future of healthcare, one where artificial intelligence may actually be an important part of any healthcare plan. For many people, the idea of artificial intelligence is something limited to Hollywood movies and science fiction novels, but the fact is, most of us use AI every day.

The charming robot at the heart of Disney's Big Hero 6, Baymax, isn't exactly realistic, but its puffy bod is an (admittedly aspirational) example of the growing field of soft robotics. And now Disney itself has produced a soft robot arm that seems like it could be a prototype from the movie. Created by Disney Research roboticists, the arm seems clearly inspired by Baymax, from the overstuffed style and delicate sausage fingers to the internal projector that can show status or information to nearby people. "Where physical human-robot interaction is expected, robots should be compliant and reactive to avoid human injury and hardware damage," the researchers write in the paper describing the system. "Our goal is the realization of a robot arm and hand system which can physically interact with humans and gently manipulate objects."