Texas Attorney General Ken Paxton said Saturday that his office has found evidence of "a lot of voter fraud" involving mail-in ballots and applauded court rulings rejecting expanded access to vote-by-mail during the coronavirus pandemic. Paxton, a Republican, said on "Fox & Friends Weekend" that the GOP-controlled state Legislature has the right to steer clear of universal mail-in ballots. "In Texas, the Legislature has tried to balance this idea of if people are out of town or they can't vote, we allow them to vote. But we also know there is a risk, a higher risk of voter fraud, with these mail-in ballots. So they have limited it," he said. 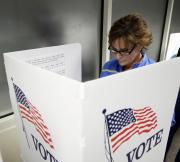 With two weeks until the election, Republican presidential nominee Donald Trump has amped up charges that the election is "rigged" against him. His running mate, Indiana Gov. Mike Pence, has warned at rallies about voter fraud "around the country." While voter fraud is rare -- one study found just 31 credible claims of fraud amid more than a 1 billion ballots cast since the turn of the century -- a handful of instances of voter fraud and voting irregularities have been found ahead of the election. At the same time, there have been accusations of voter suppression across the U.S., as civil rights groups have said Trump's instructions to supporters to "go check out" polls in "certain areas" are a call to monitor minority votes. Here's a recap of reports of possible election interference that have surfaced so far.

Because Everything Is Going So Well, a Trump Ally Is Now Offering Cash Rewards for Voter Fraud Cases

How it started: Voter fraud EVERYWHERE! AHHHHH!!!! RIGGED 2020 ELECTION: MILLIONS OF MAIL-IN BALLOTS WILL BE PRINTED BY FOREIGN COUNTRIES, AND OTHERS. IT WILL BE THE SCANDAL OF OUR TIMES! How it's going: We'll give you a MILLION dollars in return for some shred of evidence of voter fraud. President @realDonaldTrump's @POTUS pursuit of voter fraud is not only essential to determine the outcome of this election, it is essential to maintain our democracy and restore faith in future elections. We've arrived at the cash-for-fraud stage of the race.

WASHINGTON – President Donald Trump's plans to investigate the possibility of voter fraud in the 2016 election could pave the way for tough voting rules including stringent ID requirements that Democrats and rights groups say would amount to a new assault on voting rights. Trump's frequent and repeatedly refuted assertions of election fraud were a tacit endorsement of recent Republican-led state restrictions on access to the ballot, critics said, and could be an early sign of the administration's support for changes in laws that could create new hurdles to voting. "If you look throughout history, these allegations of fraud have always been deployed as a justification for restricting access to the ballot," said Dale Ho, director of the Voting Rights Project at the American Civil Liberties Union. Repeated studies have shown that voter fraud is exceptionally rare in U.S. elections and almost always the result of isolated mistakes, not a systematic attempt to cheat the system. Civil rights groups said Trump's unfounded accusations that millions voted unlawfully in November could signal a broader Justice Department shift away from its approach under former Democratic President Barack Obama of challenging statewide voting laws that discriminate against minority voters.

The online crowdfunding company GoFundMe removed a viral campaign which could be read to imply the existence of widespread voter fraud Friday, placing itself firmly in the role of attempting to dispel election misinformation. As the U.S. presidential election vote count continued to drag on Friday afternoon, and the Trump campaign worked to delegitimize ballots, a parallel campaign was going viral on the fundraising platform -- pulling in well over $200,000 from thousands of contributors. The goal was not some charitable cause, or to cover an unjust medical bill, but rather to uncover possible "voter fraud" in the battleground states of Arizona, Georgia, Michigan, North Carolina, Pennsylvania, and Wisconsin. "This fundraiser violates GoFundMe's terms of service," a GoFundMe spokesperson explained over email. "This fundraiser attempts to spread misleading information about the election and has been removed from the platform. All donors will be fully refunded."