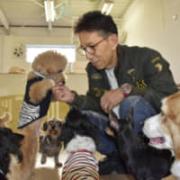 BEIJING – A Japanese man in his 50s has been detained in the Chinese province of Hunan since July, possibly for alleged spying, a Japanese government source said Wednesday. In September, a Japanese professor at Hokkaido University in Sapporo was picked up in China on suspicion of espionage, but freed earlier this month. The man in question is being held in Changsha and has had access to consular services, the source said, adding that he is in good health. It is unclear why he got in trouble with Chinese authorities. Since 2015, more than 10 Japanese citizens have been detained in China on various charges, including espionage.

The US Justice Department indicted two companies based in China and Taiwan and three individuals saying they conspired to steal trade secrets from US semiconductor company Micron relating to its research and development of memory storage devices. The charges against Taiwan-based United Microelectronics Corp, China state-owned Fujian Jinhua Integrated Circuit, Co, Ltd, and three individuals mark the fourth case brought since September as part of a broader crackdown against alleged Chinese espionage on US companies. US Attorney-General Jeff Sessions told a news conference that Chinese espionage has been "increasing rapidly", adding "cheating must stop". He said the government is launching a new initiative to crack down on Chinese espionage trade cases. In addition to the criminal case, the Justice Department also filed a civil lawsuit seeking to prevent the two companies from exporting any products created using trade secrets.

The United States announced it was ending funding for the election, and promised more "concrete steps", after the Supreme Court dissolved the main opposition Cambodia National Rescue Party (CNRP) on Thursday at the request of the government on the grounds it was plotting to seize power.

Last month, authorities charged seven journalists -- including two OdaTV editors and a reporter -- with violating laws governing the intelligence agency, for stories on the death of an intelligence officer who was reportedly killed in Libya. The journalists will go on trial later this month.