We're in North Korea. Want to know what it's like here? Send us your questions

I'm Jonathan Kaiman, the Los Angeles Times' Beijing bureau chief, and I've just arrived in North Korea. I couldn't have planned a more interesting (and potentially dangerous) time to visit. And I'll be taking reader questions. Let me be your guide! Here's the back story: The North Korean government has invited me to the capital Pyongyang this week to report on the 105th birthday celebrations for the country's founder and "supreme leader," Kim Il Sung.

The federal government on Tuesday issued an alert detailing the North Korean government's use of malware known as FALLCHILL, warning that North Korea has likely been using the malware since 2016 to target the aerospace, telecommunications, and finance industries.

A view from the ground, as defense preparations continue. North Korea fired projectiles into the sea off its east coast, South Korea's Joint Chiefs of Staff said on Sunday, days after a flurry of ballistic missile tests. This photo provided by the North Korean government shows what it says a test launch of a hypersonic missile on Jan. 11, 2022 in North Korea. If confirmed, this would be North Korea's seventh rocket volley of the year as leader Kim Jong Un has said he wanted to bolster the military with cutting-edge technology at a time when talks with South Korea and the United States have stalled. Japan's coast guard said in a statement on Sunday that North Korea appeared to have fired a ballistic missile. 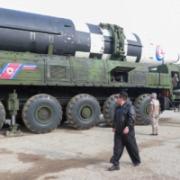 In recent months, North Korean leader Kim Jong Un has made tests of his country's increasingly powerful and capable missiles a routine matter. In response, U.S. President Joe Biden -- at least in part because of his focus on the war in Ukraine -- has largely maintained an approach resembling the Obama administration's policy of "strategic patience," a strategy that amounted to waiting for Pyongyang to come to the negotiating table. Biden's administration, however, could soon find that approach hard to sustain, with senior officials from the U.S., South Korea and Japan concluding that a North Korean nuclear test -- its first in nearly five years -- is likely imminent. This could be due to a conflict with your ad-blocking or security software. Please add japantimes.co.jp and piano.io to your list of allowed sites.

North Korea on Tuesday fired off a couple of ballistic missiles into the Sea of Japan in its latest act of aggression in the region and just hours after the U.S. reaffirmed its offer to resume diplomacy on its weapons program. At least one missile was fired from near its Sinpo Naval Shipyard, where Pyongyang holds its submarines and equipment that can fire these submarine-launched ballistic missiles, Reuters reported, citing South Korea's Joint Chiefs of Staff. The launch comes as South Korean, Japanese and American intelligence officials are holding meetings in Seoul to discuss a way forward on the peninsula. Last week, North Korean leader Kim Jong Un reviewed powerful missiles developed to launch nuclear strikes on the U.S. mainland, as he vowed to build an "invincible" military to cope with what he called persistent U.S. hostility.