Three years ago, and just a few years after Apple founder and former CEO Steve Jobs died, Tim Cook unveiled what would be, to date, Apple's only new product category under his watch: The Apple Watch. That was supposed to be Cook's moment and it hit all the right notes: Innovation in a faltering category, an iconic location (the same place Steve Jobs introduced the MacBook 30 years earlier), and a little showmanship with a specially-constructed giant white box to demonstrate the new wearable gear. SEE ALSO: What it's like to hold the iPhone 8 in real life Cook has always said that no one ever forgets Jobs and his impact and ethos at Apple, but he is never constrained by a "What would Steve do?" mentality. When Jobs first handed the reins to Cook in the summer of 2011, I wrote Apple would be "fine." It's flirting with a trillion-dollar market cap, is listed among the top three companies in the Fortune 500 list (behind Walmart and Berkshire Hathaway), is making a ton of money and has an enviable cash stockpile, enough to buy Netflix or Disney.

Apple needs a new killer product, and it can't be another iPhone

I know, Apple is held to a higher standard. The company makes 50 billion and there's panic in the streets. I don't think there's cause for panic, but concern -- even alarm -- is warranted. The trend line that's been clear on the iPad for nearly three years has finally infected the iPhone. Apple's sure-thing product category has succumbed to a variety of headwinds, including market saturation (something Apple CEO Tim Cook seemed to admit with his comments about the smartphone market slowdown), a fickle international market and crazy currency fluctuations. 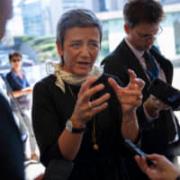 CUPERTINO, CALIFORNIA – Apple Inc. revealed on Tuesday that its streaming TV service will kick off Nov. 1 and cost $4.99 a month and new cameras for the latest iPhones, as the tech giant reaches a turning point where it focuses as much on services as its hardware and software. Apple TV will be available in over 100 countries and buyers of an iPhone, iPad or Mac will get a free year of streaming television service, the company announced. Apple revealed that its new iPhone 11 will come with two back cameras, including an ultra wide-angle lens and the next generation of microchips, the A13, but few big apparent changes. The iPhone 11 Pro will have three cameras on the back -- wide angle, telephoto and ultra-wide. It can create videos with all three back cameras and the front camera at the same time and starts at $999.

iPhone 8: How removing the home button will change your iPhone experience

Jefferson Graham previews new features expected on the next iPhone, on #TalkingTech. Lisa Gao compares a new jet black iPhone 7, right, with her iPhone 6 at the Apple Store in Chicago on Sept. 16, 2016. Try this modest exercise: Without looking at the screen, pick up your iPhone and watch how fast your finger lands on the home button. Pretty darn quick, I'd imagine. Now consider what might happen if that physical home button--and by extension the Touch ID fingerprint sensor on it--were to disappear.

The iPhone X was Apple's biggest risk, and it's paying off

I think it's time to admit that Apple's insane, convention-breaking bet on delivering an iPhone 8 and 8 Plus and the astonishing iPhone X all within weeks of each other was a winning strategy.